Been a really busy past two weeks for me and it’s good to nestle back into a routine offering for your consideration.  That being said I should appropriately note that I met some really superb people this past week at the World Conference on Science and Soccer.

It’s a small world when you meet someone who knows where Thetford, England is – and – has been there before!

Anyhow, I digress, back to American Major League Soccer and the results of Week 14.

There were plenty of surprises again this week, parity gone wild I suppose and none greater for most than Chivas, of all teams, drawing at home, erh, on the road, erh, at home on the road, against LA Galaxy; I’ll bet Arena was pretty upset with that result!

Not to be outdone, New York took three points from New England while Portland finally got a win in Rio Tinto (their third straight road win!) and Sporting spanked spurting Houston.

So who, exactly, after all those games, was the best of the best in attack? 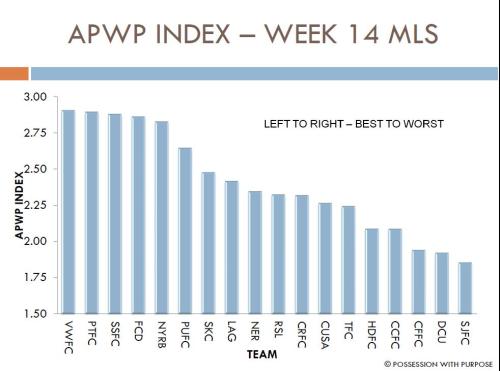 Vancouver – aye – three goals on the road in Philadelphia saw them just edge out Portland by less than a hundredth of a point – the final difference really came down to having fewer shots on goal while scoring the same amount of goals.

It’s interesting to see that both teams actually had less than 50% of the possession.

In a side discussion, at the WCSS last week, we talked whether or not the Index had a bias towards possession; most seemed to agree that the bias in PWP is towards ‘accuracy’ and perhaps ‘goals scored versus shots on goal’; not possession.

On the bottom end was San Jose, the prototypical direct attacking team, who scored no goals even though 18% of their  11 shots taken were on goal.  Of course that shouldn’t be a surprise though – San Jose are not very good on the road this year – taking just 4 points out of their current 16.  More later on their passing accuracy as well…

So how did things go on the defending side of the ball? 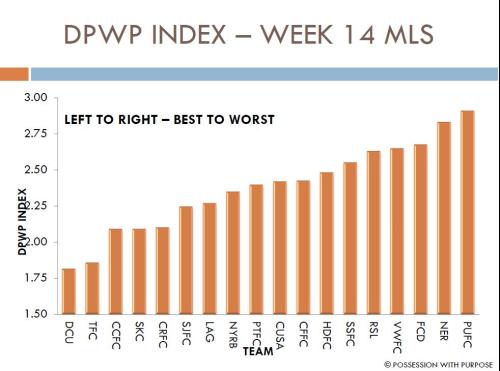 The top defending team this week was DC United; holding a very powerful possession based team, Columbus, who had just 10 shots taken with only 2 testing Bill Hamid; bottom line here is that draw for Columbus saw both Toronto and New York leap-frog them into the top five; it probably didn’t help not having Higuain running the attack.

However viewed the real difference maker between Toronto and DC United really came down to DC United playing against a more possession based team who is routinely very accurate in their passing; averaging 79.99%; the best in MLS at this time.  Well done DC United!

And since we know that Toronto yields the greatest volume of opponent passes in their own defending third it’s a pretty pathetic performance when converting just 53.08% of those passes.

As for the worst in defending this past week; Philadelphia takes the honors.

Vancouver had just 42.11% of the possession while being 5th worst in Final Third Passing Accuracy but they were completely dominating when it came to putting shots on goal and goals scored; 67% and 75% respectively.

In looking at the Composite Possession with Purpose (CPWP) Index…. 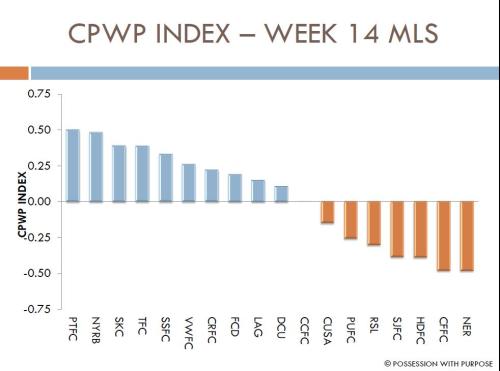 For the first time this year Portland has taken those honors – how did they do it?  A good article to read that peels that back a bit is here… some other thoughts not included are…

In addition, Portland put 82% of their shots on goal and scored on 33% of those.

Bottom line on this effort was taking advantage of space and leveraging an increasingly dangerous Fenando Adi; a true target #9 with nous and deceptively brilliant foot/heading skills!

Saying that is not to diminish the value of Sporting and New York also taking 3 points on the road; it was incredible to see New York defeat a very strong home side in New England.

No-one this year has been better at home compared to on the road – and all that without Thierry Henry and Tim Cahill; while also nursing a much-maligned Red Bull back-four.  I wonder if we see Ibrahim Sakagya play central defending midfielder again this year?

As for Sporting KC hadn’t won a game since May 10th against Montreal – so that 2-nil win at BBVA Compass Stadium had great value.

That being Houston is not the team some might think they are.  Their current points total is deceptive; they have played 16 games and have taken just 17 points.  Montreal might be at the bottom of the league standings – but when it comes to the overall CPWP through Week 14 they are higher and they have four games in hand against both Philadelphia and Houston…

Might Frank Klopas be getting things better organized as the mid-point in the season draws near?  I imagine he needs to; it can’t be easy replacing the Head Coach who actually got the Impact into the Playoffs, last year, at the expense of the team you just got fired from.

We are nearing the mid-season point and the overall Composite PWP continues to take shape.

For me, it’s still too early to try and leverage PWP as a predictive model (need at least 17 games for each team really) – that being said I might have to purge Goals Scored from the Index to really put it to test – I’ll do that after week 20 and see what the Expected Wins relationship looks like…