A bit ironic coming from me but there is a point where analyzing a game or set of games, too far, leads you down the wrong road…

Four games does not a team make and four performances is simply not enough information to draw a conclusion about whether a team is better or worse than four, eight, 12 or 16 years ago.

For me – when looking at the style of football these past four years, there is simply no reasonable way to compare progress from World Cup to World Cup; I sense it’s over-analyzing the data and using it out of context.

The here, now, and future is what is important – not some time ago.

In the here and now short-passing, possession based (ground-passing game) has been a norm of sorts.

The Netherlands, Costa Rica, Colombia, and the United States used that approach to great effect – with three of those teams advancing (lower possession and lower passing accuracy with quick counter-attacking)…

The crux of that strategy not only includes yielding penetration into their own defending third it may also, when appropriate, mean yielding penetration up to the 18 yard box; a discrete area of space where numbers help, and the technical ability of some players can be hidden.

For those simply yielding penetration into the final third, it’s more geared to having the opponent over-committ and then leverage a quick-counter attack.

When your team is not blessed with better speed and better skills then the drop is sometimes deeper (the 18 yard box).

Jurgen Klinsmann took that approach and it almost paid off.

What Klinsmann looked to rely on was the mental emotion, raw energy, and spirit of the team taking over when the opportunity presented itself – and when going a goal down his injection of Green really inspired the team to step it up.

So for me, it’s not Klinsmann’s lack of ‘nous’ that created the need for the USA; it’s a diminished amount of players available in the United States who have that extremely high level of technical pedigree, that drove his approach.

This isn’t dissing the current team – they are all very-very good players; but just not as good as some other players in other countries.

And one only needs to see the performance of Tim Howard to know that great players (as in across the World great players) do come from the United States.

In my view (others may see this differently) that lack of ‘nous’ and technical ability doesn’t really change in the United States as long as this country (and media) remains fascinated with ‘JUST SCORING GOALS’.

This game is not just about SCORING GOALS…

I’ve said this before and I’m being redundant on purpose because I feel and think it’s important for others to understand.

It’s about preventing the opponent from scoring goals and it’s about creating the opportunities for teammates to score goals.

Goal scoring, for those who are statistics type folks, is the 3rd, 4th, or 5th standard deviation to the right of the bell curve considering all the activities in a game of soccer.

Until the professional Head Coaches in this country drive that fact home and until the mass media understand that and ‘laud and praise those players that bring those skills to the pitch’ this United States Mens National Soccer Team will always struggle to be the best in the World.

A shining example takes shape with the ESPY awards this year – who’s up for the award – all four players are ‘goal scorers’; no Besler, no Rimando, no Valeri, no Zusi, no Beckerman – where’s all those guys?

In closing… some basic statistics…

The US did not dominate possession (39.22%); why? Because they don’t have large numbers of players who are really-really accurate in passing and blessed with superb ‘first touches’.

The US did not dominate when it came to passing accuracy – they were 17th best at 80.67%; even Cameroon, who got nil-pwa were better in overall passing accuracy than the United States (81%)…

In looking at the amount of possession, in the opponents defending third, the USA only penetrated 18.52% of the time they possessed the ball and of those penetrations only 16.19% of them generated a shot taken.

So what happened to Cameroon – who played a more attack based game than the United States?

They had more possession (41.31%) than the United States, better passing accuracy, as noted (81%), more overall penetration into the opponents defending third (22.48%) and more shots taken per penetration (26.45%).

Bottom line they finished -8 on Goal Differential with nil-pwa; just how much would the media in this country accept a performance like that?

So for those calling for the US to have attacked more (or to attack more next time without the proper technical abilities compared to other top nations) bollocks.

Klinsmann knows his team and worked to maximize their output with the skills his players have.

It’s not all down to the media in the United States; though some need to take responsibility.

Part of that lack of understanding (in my view) is a lack of communication by professionals managing soccer in this country who fail to take advantage of the media exposure to reinforce that this game is not all about scoring goals.

MLS Soccer could do it’s job by leading the media to help others better understand the nuance of this game, and those, elsewhere, socializing the idea of sacking head coaches, strictly because of won-loss records, should do their research and offer up more substantive data than just wins and losses; just saying…

The game is about possession with purpose – do what you need to do to gain possession of the ball, move it forward, as appropriate, create penetration, create goal scoring opportunities that increase the chances of putting more shots on goal, and then… score goals.

Scoring goals is but one step in attacking football; a critical step to be sure but there’s a whole lot of other ‘stuff’ that needs to go right before scoring that goal.

The other part (and most important part statistically) is to prevent your opponent from doing just that.

Finally… for what it is worth, I thought the US Mens National Team did well this year but they could have been better.  Starting with:

In case you are wondering – here’s how they compared in attacking and defending (to the rest of the world) too: 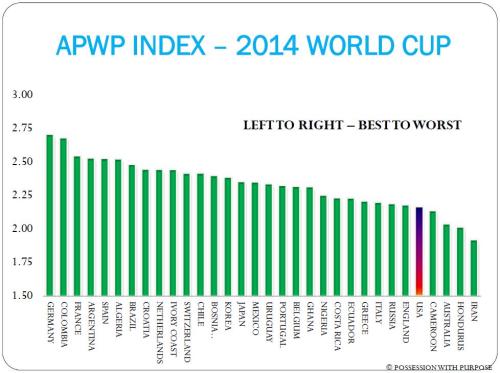