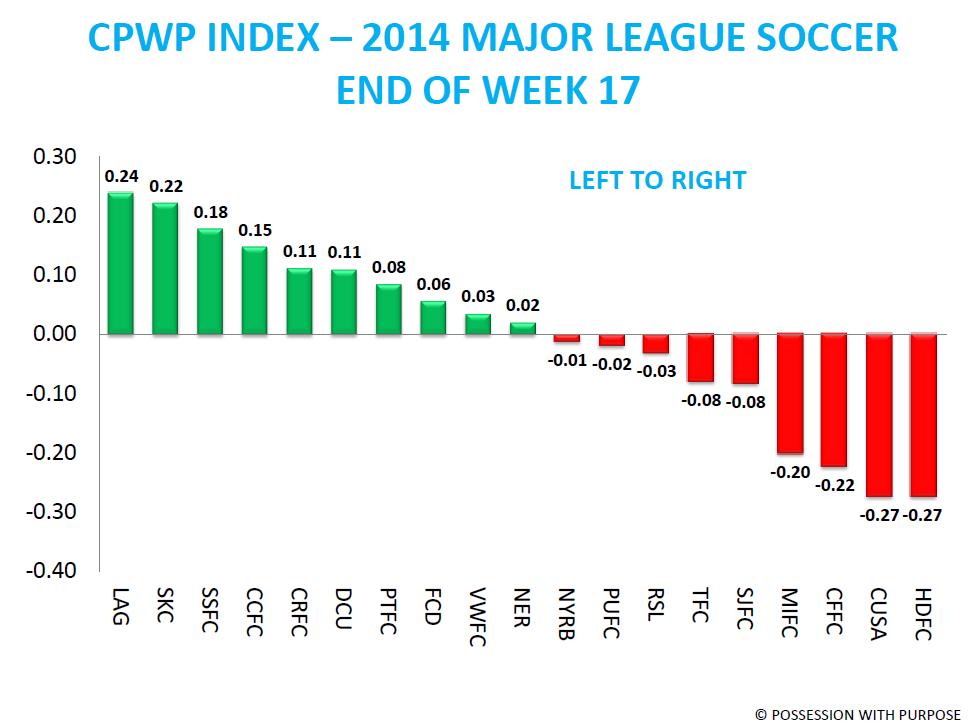 As you know I’ve attempted to create a Predictability Index (PI) from my Possession with Purpose (PWP) analysis.  Here’s a link in case you missed the first article on PWP Predictability.

Before looking at the overall results here’s a reminder on where all the teams stand after 17 weeks:

All told that’s 3 of the top five teams in the Western Conference – not ideal but pretty close.

All told that’s four of the top five teams in the Eastern Conference – again not ideal but pretty close.

How does last year compare to this year after Week 17?  I’ll cover that in my next article…  For now since most teams have eclipsed the 17 game barrier I use the separate Home and Away CPWP Predictability Indices…

A reminder, of sorts, the CPWP PI is not intended to predict draws; it’s strictly an attempt to “test” how well it can/could predict wins.

The diagrams (along with individual Team Index numbers)  are provided at the end of this article.

Before kick-off; a reminder that last weekend’s games saw the CPWP PI had relevance in five out of six games where a team won/lost versus drew.

So for teams that won on the road this week we have:

The away CPWP PI for Chivas USA is -0.19; the home CPWP PI for San Jose is -0.04; the PI indicates Chivas should have lost – they won (inaccurate).

The away CPWP PI for DC United is -0.16; the home CPWP PI for Toronto FC is +0.09; the PI indicates DC United should have lost – they won (inaccurate).

So for teams that won at home this week we have:

The home CPWP PI for Dallas is +0.07; the Away CPWP PI for Philadelphia is -0.02; the PI indicates Dallas should have won – they won (accurate).

The home CPWP PI for Vancouver is +0.18; the away CPWP PI for Seattle is -0.06; the PI indicates Vancouver should have won – they won (accurate).

The home CPWP PI for Chivas USA is -0.28; the away CPWP PI for Montreal is -0.11; the PI indicates Montreal should have won – they lost (inaccurate).

In closing… and that promised look at Chivas USA.

All told where there weren’t draws the CPWP PI was three out of six games.

Clearly betting against Chivas USA at this time is not a worthy endeavor.

Here’s the differences in their Possession with Purpose indicators in the first 14 weeks compared to the last three weeks:

As promised the CPWP PI Away Index:

Next up Week 17 PWP in review…