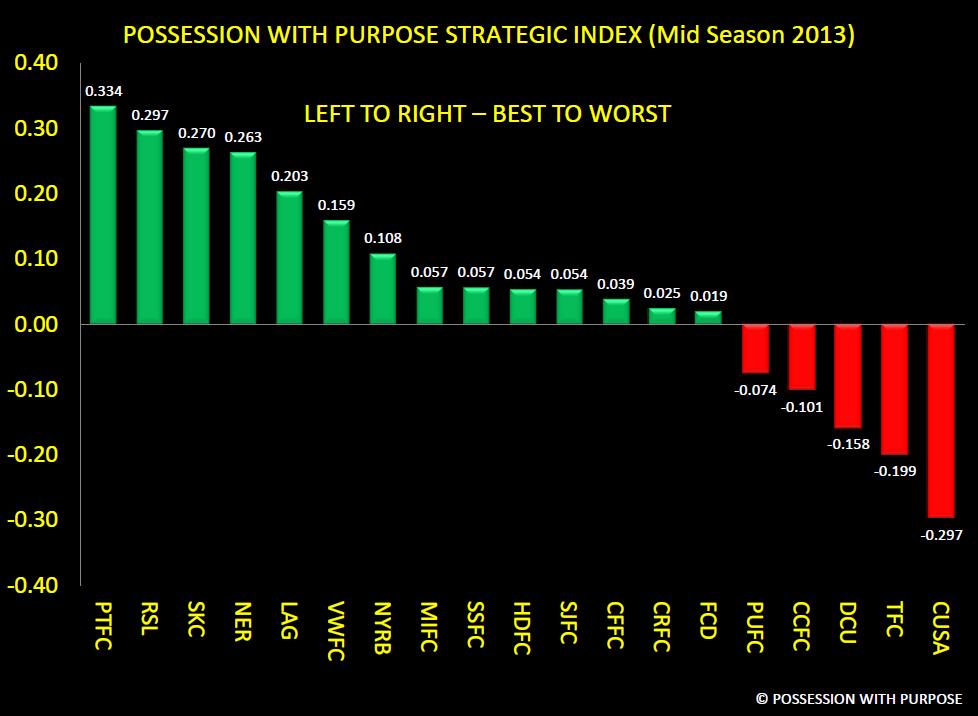 Over a year has passed since my first broad strokes about Possession with Purpose were applied to Major League Soccer; since then we’ve had one full year to look at it and how things have played out.

So how do things stack up today versus Week 17 last year, and, is something going on with DC United (besides the new strikers) that is different this year?

The top five Western Conference teams were Portland, Real Salt Lake, LA Galaxy, Vancouver and Seattle; the only team not to make the Playoffs last year was Vancouver.

Upon reflection, it was their defense that let them down, and the most probable reason why Martin Rennie got sacked.

In looking at the top five Eastern Conference teams they were Sporting KC, New England, New York, Montreal, and Houston – the same top five teams that eventually made the Playoffs.

So how about this year?

In looking at the Eastern Conference teams, the top five are Sporting KC, Columbus Crew, DC United, New England and New York – the odd one out, at the moment, is Toronto vice Columbus.

It should be noted that Toronto also have at least two, and no less than four, games in hand – so it’s not exactly “apples to apples yet” but should be in about 3 weeks time. As for the Western Conference, the top five so far are LA Galaxy, Seattle, Colorado, Portland, and FC Dallas.

The HUGE, if not inordinately large question here is… Can the Portland Timbers turn their defensive nightmare of a season around with a healthy Norberto Paparatto, Pa Madou Kah and newly signed Liam Ridgewell, for three solid center-backs?  And, if so, does that fix the defensive issues?

Now an even tougher question…

Is the level of accuracy, last year, to be expected this year (nine for ten in teams last year making the Playoffs, based upon 17 games of data)?

In other words, playing to a counterattacking style, that sees some teams offering the opponent higher levels of possession, penetration, and shots taken.

So is there another way to try and answer the question about accuracy in the CPWP Index?

How about the CPWP Predictability Index – what does that offer after Week 17?

In looking at the CPWP PI, the numbers seem to indicate that Sporting KC, Columbus, New England, New York and Philadelphia have the best chances of winning, given historical team performances this year.

As for the Western Conference; LA leads with Colorado, Seattle, Vancouver, and Portland – that sees FC Dallas dropping out with a smaller chance of winning and Vancouver sliding in…

And yet, neither Index has Real Salt Lake in the top five – could that be? Has the loss of Saborio, Beckerman and Rimando impacted RSL that much in such a short time span; and what does that say for the second half of the season? Lots of questions with no answers yet…

Now… take a look how far down DC United are in the Predictability Index (5th worst predictability in winning) – might that indicate how fortunate they have been in scoring goals or is that a reflection of something else going on?

DC United have the second best Goals Scored versus Shots on Goal of all the teams in MLS (42.12%); FC Dallas lead MLS in that category with 44.26%. Clearly the addition of Espindola and Johnson (even if they don’t play together) has added extreme value to this team.

Especially when their percentage for this same statistic, last year, was just 16.66% I wonder what the Expected Goals look like for DC United and how their shot locations may have changed this year compared to last year? Perhaps one or two folks who specialize in Expected Goals can help answer that one?

I did check to see if they have been awarded more PK’s than other teams – no – only 2 PK’s awarded so far this year.

As for Opponent Red Cards?

Perhaps that has created a positive influence in Goals Scored? Their opponents have had 5 Red Cards this year (two by FC Dallas in one game) – that is tied for 3rd highest (best/most advantageous) in MLS.

Has that helped?  I think so…

DC United have 10 points in the four games where their opponent has been red-carded and nine of their 24 Goals Scored have come from those games.

So, in retrospect – if the opponent’s for DC United “play-fair” it is (likely?) that will negatively impact DC United in the League Table.

That’s one advantage of the CPWP PI – it is not ‘doubly’ influenced by opponents being Red or Yellow Carded – it’s strictly five of the six primary data points of PWP.

Still plenty to play for and any team, and I mean any team, can get on a winning streak – just look at Chivas USA their last three games.

How all the ‘defensive bunkering’ folds into the PWP Indices and Predictability outcomes has yet to play out. When every team reaches 17 games I’ll regenerate this article with updated information.