Last year the Chicago Fire were within inches of making the Playoffs – and like it or not they sacked Frank Klopas who then moved on to the team that beat them out of the Playoffs – Montreal.

Why Montreal sacked their Head Coach is unclear.

Given the importance so many teams place on making the Playoffs it’s hard to imagine a team booting a Head Coach who got them there.

But this article isn’t about Montreal – been there – done that awhile ago and will visit them again… for now the heat-lamp turns to Chicago, who also fired their Head Coach last year…

There are two other teams that have had roughly the same bad run as Chicago, the aforementioned Montreal and a previous subject of my analysis – Houston Dynamo.

The Dynamo have made it pretty clear (at all levels of management) that new personnel are needed to right the ship – that remains to be seen.

So how about Chicago?

As far as I can tell there are no major new signings and no rumors that I can find – perhaps others know differently. (NOTE:  Sanna Nyassi was just obtained in a trade for Dilly Duka).

Given that, and my habit of analzying team performances, here’s the ugly picture on Chicago this year (compared to others in MLS) and where the gaps may exist.

Third worst in MLS, in overall team performance, on both sides of the ball – only Chivas and Houston are worse.

Bottom line here is that Chicago are:

Working from the back – forward – Defending first…

Here’s the Defending Possession with Purpose (DPWP) Index for starters:

Chicago are the worst in team performance when it comes to overall defending – in other words the combined results of their opponents in Possession, Passing Accuracy, Penetration, along with creation of Shots Taken, Shots on Goal and Goals Scored is last; this Index does not measure Points garnered in the League Table.

In terms of racking and stacking the Six Steps measured, one by one, Chicago yield the third highest amount of Possession, to their opponents, of all teams in MLS (55.43% per game).

Now possession, alone, is not a single indicator that tells the whole story but it does give an indication if a team can at least offer up the appearance that they are controlling the flow of the game.

With respect to Opponent Passing Accuracy:

They are actually pretty good in this area compared to others; all told opponents average 75.66% in passing completion rates but let’s take a quick peak at a slightly different angle.

How Chicago compares in the percentage of ‘unsuccessful passes’ across the Entire Pitch versus within their own Defending Final Third:

There they are in the top five… 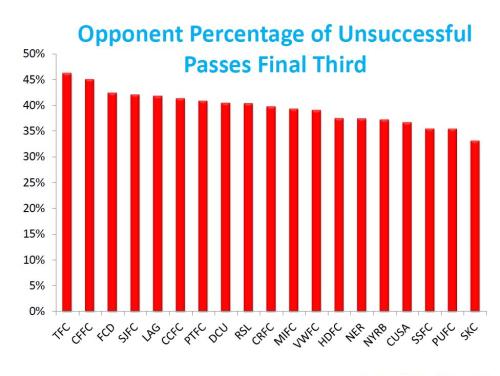 And there they are again – 2nd best in MLS.

The takeaway here is that the opponents are not having a great success in passing but the overall team defending is still the worst!

So are Chicago on the tail end in yielding Shots Taken per possession/penetration?

Nope – they are 4th lowest in ceding Shots Taken per penetration at 17.31%.

How about Shots on Goal versus Shots Taken?

Bingo…  of all the teams in MLS, Chicago are 2nd worst in allowing Shots on Goal per Shot Taken ( 39.24%) only Philadelphia is worse.

When it comes to Goals Scored versus Shots on Goal they yield a stunning 43.24% success rate to their opponents; the worst in MLS and a full 11% points higher than the MLS average.

When I did an evaluation of Houston the other day – it was this category that stood out as being one of their better defending categories.

In essence, what this meant was Tally Hall was actually doing a very good job, as the Goal Keeper, compared to their back-four and defending midfielders.

So for Chicago I see a few things going on that are leading to their downfall in defending within the Final Third:

In wrapping up the Defending side of the pitch:

Chicago cede possession and appear to do a solid job when it comes to applying pressure and closing down the passing lanes – unfortunately it would appear that when the opponent is successful in penetrating and taking shots they are usually on goal.

For me that translates to too much open space and too much time = i.e. poor positional play.

In addition – the defensive lack of vision in seeing their own weaknesses is also impacting their Goal Keeper; Sean Johnson’s save percentage is 59%; tied for lowest in MLS.

While some may scoff at this suggestion I would offer their back-four needs at least two new players with a bit more vision and speed in closing down gaps as they appear.

I’d also offer thoughts on the midfielders but it appears Frank Yallop runs a 4-4-2; at least the MLS stats indicate that.

But I’d be surprised if that were the case; my impression in watching Chicago was that Jeff Larentowicz played a single pivot CDM and not part of a double pivot tandem.

Others who follow the Fire more closely will know that better than me and may be able to add clarity here?

However viewed, I’m not seeing the addition of Sanna Nyassi as adding great value given what Yallop said in this article… Nyassi was a similar player to Dilly Duka.

Now for the Attacking side of the pitch and APWP:

Not quite as bad in attack, as a team, as they are in defending as a team…

With their opponents averaging the third highest amount of possession it pretty much means the Fire average the 3rd lowest amount of Possession.  Usually a great indicator that a team is leaning towards a direct attacking style (or perhaps counter-attacking style) as opposed to a possession-base style.

In looking at Passing Accuracy; all told the Chicago Fire have the worst passing accuracy of any team in MLS.

In considering those first two indicators it really reinforces that the Fire are playing a direct attacking style; usually possession-based teams play shorter passes that are more likely to be completed – given the poor passing accuracy AND poor possession numbers that pattern matches other teams known for playing direct.

So while Frank Yallop might have appeared to veer away from Direct Attack in San Jose it certainly looks like he has had to revert back to that style given the player resources he currently has.

But before moving on to penetration here’s the overall passing accuracy numbers across the Entire Pitch and then just within their Attacking Final Third: 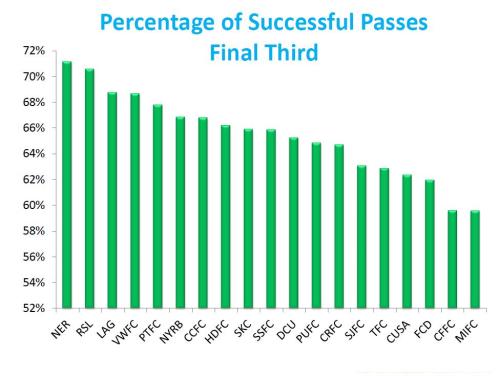 Bottom of the League in both categories…

Wow; this team really has done a poor job in passing this season – and what’s odd is that level of passing accuracy should be correctable on a training pitch – more practice should help make these players more accurate.

So how about penetration, creation and finishing?

Chicago are in the top half for penetration – again – if they are playing direct attacking football then that is a likely scenario – especially with that poor accuracy in overall passing.

What’s happening is that instead of taking time and patience to move the ball up the pitch they are simply looking to hoof it and hope.

And again – with a higher level of direct attack, and less patience in passing the ball, a direct attacking team will tend to take more shots – indeed – Chicago have the third highest number of shots taken per penetration.

That percentage increase also drives an increase in shots on goal – they are 6th best in converting shots taken to shots on goal.

But when it comes to shots on goal resulting in a goal scored they are 8th worst.

Clearly the attacking approach is not working – and if not for being awarded six Penalty Kicks (tied for 2nd most in MLS) it is likely that Goals Scored percentage would be near Houston, who’s at 20%.

By the way… in checking Whoscored.com Dilly Duka’s passing accuracy was 74.3% and Sanna Nyassi’s was 75% – not much difference statistically either…

I’m still scratching my head why Frank Klopas was sacked and Frank Yallop was hired?

NOTE:   This is not to intuit that the sacking of Frank Klopas was not a reasonable path forward – I suppose what this really means is the replacement of Klopas with Yallop looks to mean that nothing has really changed between last year and this year…

Might that mean Frank Yallop gets the sack at the end of this year?  Probably not – I would have thought he will get at least one more year to sort out the team and shape it to his liking…

Perhaps others who follow Chicago Fire can add some thoughts here?  PS:  Thanks to @irishoutsider for adding some thoughts to help clarify 🙂

However viewed, the Fire are burning and not burning hot – it’s a cold burn more attuned to frostbite and the winter seen in the Windy City…

It will probably take a complete makeover to sort this team out; and given the general nature of the direct attack that appears to be employed I am very surprised Yallop has not brought in a target striker like “a” Lenhart or Gordon type guy.

LATE EDITORIAL CHANGE:  As noted the acronym for Chicago Fire Soccer Club is CFSC not CFFC – please forgive my old english habit of referencing a team as an FC…  future articles and analyses will be updated as appropriate.