These next few weeks will be slightly different.

I’m going to take a peak at some teams that may be sleepers or may end up snoozing and losing.

So let’s throw the net over Real Salt Lake this time.

What’s happening that is driving down their overall team performance but not yet impacting their results?

And might this information be an indicator of something to worry about if you’re a Salt Lake supporter?

If you watched the 1-1 draw against New York it is likely you noticed Alvaro Saborio is missing.

While I don’t like to dig into individual performances too much there also needs to be a recognition, up front, that Kyle Beckerman, Nick Rimando, Alvaro Saborio, Joao Plata, and Chris Schuler have all missed at least 200 – 900 minutes of play so far this year. 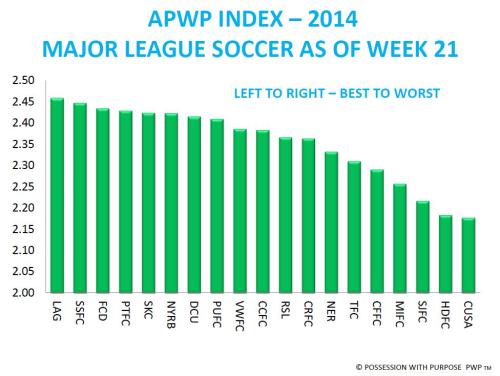 Consistency of purpose – and all that with some of their top players missing.

Never let it be said that RSL are not a possession based team who has pedigree in passing!

On the scary side… Real Salt Lake have been awarded and scored 6 PK’s and won four of those five games (drawing the other) amounting to 13 points coming in games when awarded PK’s.

Now it’s not really fair to say that if they didn’t get those PK’s they would have dropped points.

But in the five games where they’ve had six PK’s RSL could have ended up with one win, two draws and two losses – for a total of five points as opposed to 13 points.

Minus eight points puts them on 25 Points, not 33 – and that total puts them behind Portland and in 7th place in the Western Conference!

And when losing what do the passing statistics look like?

When losing their overall passing accuracy across the Entire Pitch doesn’t drop – it increases to 79.73%. A surprise perhaps – but given their volume of passes exceeds 450 per game it’s not hard to envision an increase.

What about narrowing the scope to just the attacking Final Third?

Their passing accuracy, here, takes a nose dive; moving from 70.56% down to 65.61%. Clearly this team thrives on passing.

So what about penetration and creation of goal scoring opportunities?

When winning, they average 16.78% shots taken per penetrating possession.

When losing that percentage drops down to 10.82%.  That corresponding drop in passing accuracy, within the Final Third, translates to the frequency of their Shots Taken as well.

And in finishing, when losing, their goals scored, per shots on goal, drops all the way down to 5% – compared to 38.41% when winning.

So where is their overall attacking team performance not matching some other top performing teams in MLS?

The single biggest difference comes in Goal Scored per Shots on Goal.

RSL sit at an overall average of 26.75%; that is 5% points less than the closest team to them in attacking (Columbus).

And a full 10% less than the overall average for the top ten teams in APWP.

Bottom line here: The loss of Alvaro Saborio has been significant – and with that much of an impact, it is likely their overall consistency of purpose in possession based attacking may see them either:

I’ve already gone on about the missing players but it should be noted that Beckerman, Schuler and Rimando are huge pieces to their defensive puzzle… especially if their overall possession percentage remains at 55% – defending with the ball is a reasonable and legitimate tactical strategy.

In my view there should be concern that their DPWP is not that great even though they have a large majority of possession (55% to 45% for their opponents).

When peeling back the comparisons the biggest differences in team performance, compared to the better defending teams, comes down to a few things:

All told, this should give due cause to hope that the defending team performances get better as it’s likely their ratio of PK’s awarded per game will smooth out to the MLS average of .2 per game.

With only 13 games remaining that equates to about 2 – whereas they’ve garnered 6 in 21 games.

Some other supplemental defensive team performance information for your consideration:

In looking at this information it does paint a picture (excluding defensive clearances) where their opponents are showing tendencies to have set-piece/dead ball situations in the final third.

The saving grace here is the volume/percentage of defensive clearances the back-four/set-piece markers are getting during those dead ball situations/crosses.

Any team missing as many as five regular players for over 3000 minutes is going to take a hit in overall team performance.

This league simply isn’t designed to facilitate carrying 18 “strong” players like most leagues in Europe.

In looking at the defending team performance indicators, given the high volume of crosses, corners and free kicks, RSL could have some significant issues if either Chris Schuler or Nat Borchers got injured.

Indeed, on the other side of the ball there does appear to be a gap in scoring – magnified even more given their overall passing accuracy is right where it was last year… (first class).

For now, only Saborio remains out – but in watching that game against New York they do miss his presence in the air.

Do they find a short term solution?  I think they do.

Is that someone like Robbie Findley, Olmes Garcia or Devon Sandavol I’m not sure…

Perhaps others who follow Real Salt Lake more closely might have some thoughts to add on that?