Even when it’s early days there are just some things that already make themselves clear – Barcelona are the team to beat in La Liga.

How many pretenders are contenders in the English Premier League is also another story… but Chelsea have certainly opened up well.

If you’re reading about Possession with Purpose for the first time click this link to get more details on this comprehensive team attacking and defending Index.

For the first time, this year, I am using this analytical approach to measure team performance in the English Premier League, the Bundesliga, and La Liga.

With that, here’s my Composite PWP Strategic Index on La Liga, after Week 2:

A reminder – the Composite Strategic Index is a measure of the difference between the Attacking PWP Index and Defending PWP Index; as such it’s intent is to offer a comprehensive (strategic) view of how teams perform in those areas without taking into account specific individual accomplishments…

For me, teams win and teams lose, to quantify that one individual has that much power is (usually) inappropriate.

But like Ice Hockey and Wayne Gretzky, there is Lionel Messi in Soccer and – at least for now – it is reasonable to assume that Barcelona are really-really good because he’s on the team.

Fair dues but, here’s the thing, Messi doesn’t usually pass the ball to himself (most of the time) 😉  so there are ten other guys who do touch the ball.

That said there were a number of transfers this past week so some teams are lining up to try and get past Barcelona – I guess we’ll see how that goes.  For now though, Barcelona are alone at the top.

If you like statistics know that after Week 2 the R2 for the La Liga CPWP Index is (.64); pretty good, not as solid as the R2 for the MLS CPWP Index (.80) but it does appear to have relevance to the League Table without including points for wins or draws.

Before moving on to the Attacking PWP Index here’s a quick snap shot on team passing accuracy in La Liga after two weeks; that’s not a mathematical calculation error – Barcelona is averaging 90%:

If you had to rack and stack the leagues, given Passing Accuracy as being a top indicator of quality, clearly the EPL has the best average (top to bottom) of those four leagues.

So in getting back to the original question – who’s going to stay with Barcelona this year?

I’d expect Real Madrid for starters – obvious reason they spend loads of money but is there a team hiding in the weeds like Atletico Madrid did last year?

To be honest, I have no clue yet, but consistency of purpose is a good thing and at least two teams have shown some good form, compared to most others early on; Valencia and Athletic Club.

But since they have yet to play Barcelona or Real Madrid it’s almost “mere” speculation.

In looking at the Attacking PWP Index here’s how they stand: 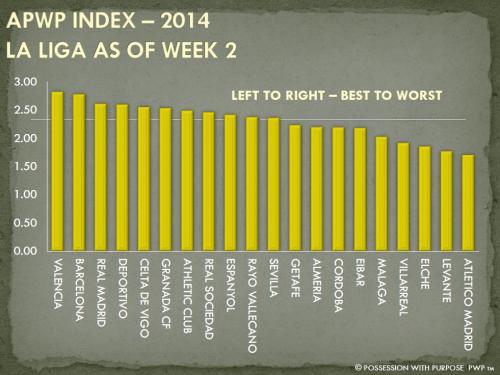 Valencia lead this side of the equation but like the Major League Soccer APWP, this is subject to change as more teams go head-to-head with each other.

Another observation about this Index is that this one is a much better reflection of the opponent played against – in other words there are teams that purposefully cede possession – when that occurs these numbers will be influenced.

Teams that have played those teams will have their Index numbers influenced more, in some areas, than teams like Sevilla or Deportivo, who have averaged near 50% possession with near 75% passing accuracy.

However viewed, early form has just as much value in garnering three points as late form does; if a Head Coach has his team switched on the pressure should really be no different.

Will Valencia, Deportivo and Celta continue to stay near the top in APWP?  Hard to say but we will see.

In looking for early season contrasts, in attacking and defending, the team with the biggest Dr. Jeykl and Mr. Hyde appears to be Atletico Madrid:

In team attacking, they are bottom of the Index, in team defending they are 3rd best…

If I had to hazard a guess I’d imagine Atletico Madrid have got the appropriate focus on team defending – what they will need to secure a stronger position will be better team attacking.

I guess we’ll see how that matures, as well, this season.

It’s early days but it’s pretty clear the overwhelming amount of possession, with an extremely high rate of passing accuracy, will keep Barcelona at or near the top – provided they can generate shots and score goals; hard to imagine they won’t given the sheer quantity in quality…

All for now, best, Chris