Consistency of Purpose – as a business analyst I know that organizations usually strive for consistency in performance.  The general idea behind this is that before you can really begin to assess what improvements need to be made you first need to have some sort of ‘control’ over the effort.

In laymen’s ‘statistical’ terms – the lower the standard devation of an activity the more control there is in the effort – and therefore a better opportunity to actually improve the output.

For me, this approach should also apply in soccer team performance – the less standard deviation you have (from the mean/norm/average) the better; the worse the variance the more ‘out of control’.

So in keeping with my previous article on Consistency of Purpose (In Attack) I’m offering up the standard deviations for teams as they defend against their opponents.

In preparation for my analysis on Consistency of Purpose a few details to set the stage up front:

Before kickoff here’s how all the teams line up against each other in Composite PWP through Week 27:

LA Galaxy remain atop the CPWP Index – statistically speaking the R2 is .817 – the highest correlation so far this year to Points in the League Table.  And from what I have seen, in other statistical analyses approaches, this Index continues to remain the most relevant independent (publicly generated) Index in Soccer…

Of note; my next article to be published, following this one, will againt take a different look with this Index – what I will do is split the Index into two parts – the first CPWP Index will look at how well the teams perform that:

The intent will be to look and see what teams perform better or worse given their general volume of passes; the results may surprise some folks…

Anyhow – I digress – here’s the first of seven diagrams plotting the Standard Deviations of team’s as they defend against their opponent with respect to Passing Accuracy: 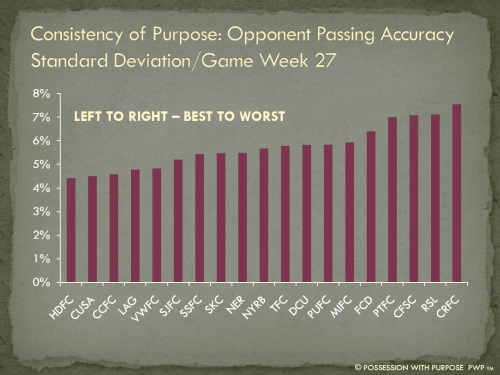 Passing Accuracy across the Entire Pitch:

The team with the lowest (best) standard deviation is Houston – as noted earlier in the year Houston made two defensive acquisitions – Garrido and Beasley – in case you missed it I think they have taken seven out of nine points since those players were added.

Chivas USA are next up for consistency – like Houston, consistency here relates to being poor in team defending against opponents passing accuracy – as such it should be pretty easy to point out all the weak links if that level of consistency, in being poor – with respect to final results – continues.

Near the top are both Columbus and LA Galaxy – if you recall from the Consistency of Purpose, in attacking, Columbus were pretty consistent in their own Passing Accuracy (most consistent) – and likewise they are up top again.

What’s scary here is that LA Galaxy are 4th best – so with a superb record – they are also superb in consistently managing the opponents passing accuracy… can you say MLS Champion?

At the opposite end is Colorado, and oddly enough, Real Salt Lake – why is that?

For Real Salt Lake, I’d offer that this may relate to the different styles their opponents take when either playing them at home or on the road – more to follow when the season ends on this one.

As for Colorado – they’ve had a number of injuries this year and they will, at times, cede possession to gain better effect on their counter-attack / direct attack – with that I’d expect their team to vary greatly in how well the opponent passes against them.

What to look for is more consistency as the data points narrow down to shot taken, shots on goal, and goals scored.  More to follow here…

On the other hand, Portland don’t really look to cede possession to often, so what might be impacting this level of inconsistency in managing the opponents passing accuracy – knowing that their Goals Against is one of the worst in MLS?

Are they more or less consistent in defending as the pitch gets smaller?  And might that level of consistency help or hinder their chances of making the playoffs?  More to follow… 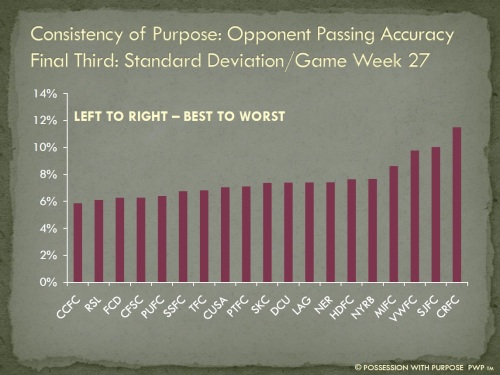 The one that stands out the most is Colorado – so the hope that the variation decreases isn’t occuring with Colorado; they have an even greater deviation, from the norm here, than they do with Passing Accuracy (7% versus 12% here).  Is that a surprise?

Also trailing at the end is San Jose – like Colorado they try to play for counterattacking – and since they are also a direct attacking team it’s reasonable that these two teams would be here.

As for Vancouver – hmmm… I’m not sure – perhaps at the end of the season this will take better shape when viewing home and away tactics/outputs a bit more?

In looking again at Columbus – more consistency of purpose – and what makes this even better for the Crew is that where they have one or two players who aren’t performing, it will make it easier to “see” who they are…  a much stronger and more reliable way to help the team ‘fix’ what’s not working…

Percentage of Penetration versus Possession:

In looking to understand New England – the most consistent team here – figure the more consistent this team is in defending against penetration the easier it may be for them to plan on what defending tactics they will execute game in and game out.

On the other end of the scale we see New York – I suppose, for many, a high variation is no surprise here.

Many would not consider Petke a defensive minded coach – and the tougher it is to manage the midfield, prior to penetration, the tougher it may be to sustain consistency as the opponent looks to score goals.

For me, as a defensive minded guy, it would be this primary statistic I’d look at first.  But not until filtering out the differences between home and away as well as volume of passes faced; as noted earlier – I’ll do that at the end of the season. 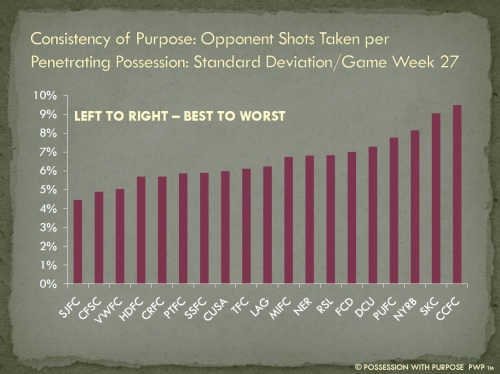 Here’s where the real rubber begins to meet the road…

In my view teams that have a wide variance here gets down to what inconsistency that team has in rgularly limiting time and space for shots to be taken – OR – it’s a reflection of how impatient some teams may be against that team in taking shots given more or less opportunity.

In looking at San Jose being the most consistent here I’d offer this gets back to how effective they are in managing the zone defense they have – recall that both San Jose and Colorado were pretty inconsistent when it comes to opponent passing accuracy within and outside the final third – here those numbers translate to more consistency of purpose in managing the opponent as they actually penetrate with the intent to score.

On the flip side Columbus were pretty consistent in managing the opponents passing within and outside the final third – yet that consistency begins to translate to more varation as the opponent looks to take shots.

Do they get better or worse in their variation?  More to follow…

Sadly, for Colorado, that consistency seen in looking to manage Shots Taken per Penetrating Possession doesn’t translate to a matching level of consistency in Shots on Goal per Shots Taken.

In other words Colorado is more likely to yield more time and space to the opponent as they take their shots – hence more of their opponents shots are on goal than San Jose – who’s above average in consistency.

The most telling level of consistency here is Portland – and what’s really sad about this is that they are consistently bad – I can say that because their Goals Against is one of the highest in the League.

If there was ever a compelling piece of evidence – given goals against – I’m not sure.  Others may have a different view on this.

The flip side to this is that it should make it easier to analyze where the consistency in weakness comes from – therefore menaing it should be easier to correct for the future.

With respect to LA Galaxy, and being the most inconsistent – I’m not sure why that is and perhaps it will show better when I split the analysis up based upon opponent’s passing volume or their home versus away variations.

In considering Philadelphia – a likely impact  here is the change in leadership – as Hackworth was replaced perhaps the team  made some intergral changes in their defensive approach?  Like LA, I’ll look for that when the season ends. 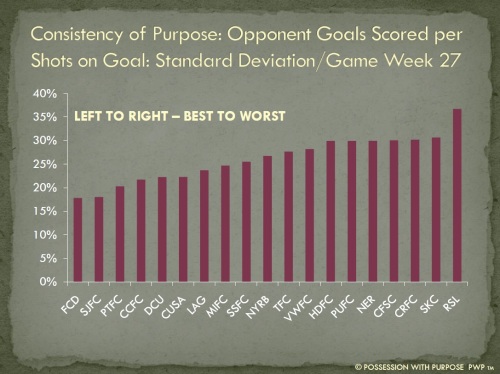 Up near the top, again, in consistency for this indicator is Portland.

Really reinforcing, for me, that their consistency in being bad in defending (poor positional play in ceding time and space) continues… some might even offer that this translates to the need of bringing in a new goal keeper as well???

For me, it also supports the volume of individual mistakes made, consistently, at the wrong time… given their high Goals Against.

There’s San Jose, again near the best when it comes to consistency.

I’d offer this should give Watson, and the front office, pretty good background statistical information to fix what defensive issues they may have as the season closes and/or in preparation for next year.

Colorado, on the other hand, who was consistent in yielding time and space for the opponent to move the ball, continues to show how poor they are in managing that opponent consistency as they enter and create/generate shots that score goals.

Perhaps that is down to injuries?  I’m not so sure – I’d offer it may be down to an imbalance they have across the back-four; along with support from their midfield.

On the tail end is Real Salt Lake – with the World Cup and injuries I suppose this isn’t too much of a surprise.

But with the fourth lowest Goals Against (35) in MLS, that variation is probably not too much to worry about.

And with Jeff Attinella having over 700 minutes of playing time, compared to Nick Rimando’s 1800 minutes, perhaps that variation is more a reflection of good goal keeping versus great goal keeping?

Note how low Sporting KC is here – perhaps that is more about the volume of red and yellow cards they’ve recieved more than anything else???  As the season ends I’ll peel this back a bit more too…

Although Ryan Nelson was sacked, it would appear that his overall approach in managing a consistent level of defending was best in MLS (with respect to results), at this time.

What that means is that – going into most every game – Ryan Nelson could expect, with some level of consistency, how many goals the opponent might score.

That, in turn, should help him devise what attacking approach he might use to maximize points.

In considering Colorado – things just go from bad to worse – consistency in ceding possession and penetration has not resulted in consistency when it comes to managing the bottom line.

While perhaps somewhat cynical, I’d offer this inconsistency, as the pitch gets smaller, will make it very hard for them to piece together a final playoff push – as in the bottom line – they really can’t rely on a consistent performance from their defense.

In retrospect – with the Timbers being much more consistent in their defensive weaknesses it may actually be easier for Caleb Porter to manage what expectations he has going in… thereby easing the stress; it is what it is…

NOTE:  A compelling issue here with respect to ‘standard deviations’ is that there is the potential for the variations to be a FUNCTION of which conference a team is in.

It should be noted that a number of teams play counter-attacking and direct versus those that play possession-based soccer; that is why I will be filtering this data, at the end of the season, by volume of passes.

No doubt the consistency of purpose will look different when teams have completed the season and additional filters are in place (i.e volume of passes faced or home versus away).

The screws tighten even more…