For those not familiar with this phrase – Passing domina temprana (Passing dominates early) – get used to it as my Possession with Purpose analyses moves to La Liga.

I’ll get to the details behind that view a bit later but first a look at the traditional analysis on PWP plus an early focus, like with the Bundesliga, on the slow starters. 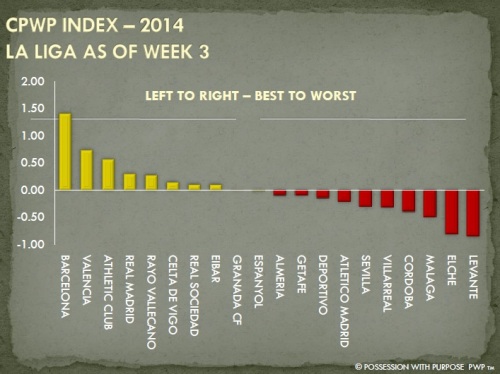 The clear leader here is Barcelona – as noted last week a team passing Barcelona might find it difficult (both on the pitch and in the league table).

Knowing that I’ll prefer to wait on digging into Valencia, Seville, Real Madrid, and Atletico Madrid till a bit later.

For now, since this is a relegation league, like everyone else in the World apart from Major League Soccer, let’s take a peak at teams who’ve opened at a snails pace:  Levante, Espanyol, Cordoba, Almeria, and Rayo.

Next up Attacking (APWP) Strategic Index: 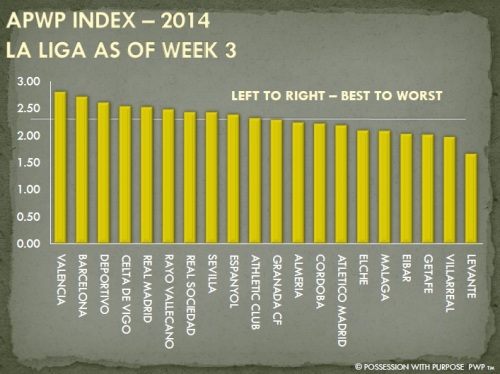 The surprise here for me is seeing Valencia ahead of Barcelona – for me this reinforces, at least for now, that obnoxiously huge levels of passing numbers don’t over-influence the Index.

As for the bottom feeders… here you go: 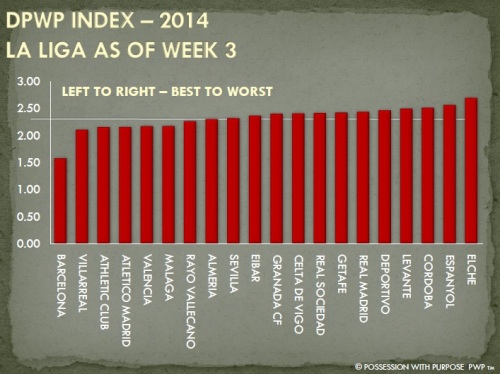 As expected – a team with huge passing numbers is likely to be in the top half (at least huge by Barcelona standards).  More interesting, and good stead for Villareal, is their position near the top of DPWP.

In looking at the early relegation battle here’s how the bottom five look:

Now for the “more to follow” on this league being a passing league – the CPWP Strategic Index for teams where they have exceeded the league average in volume of passes (415): 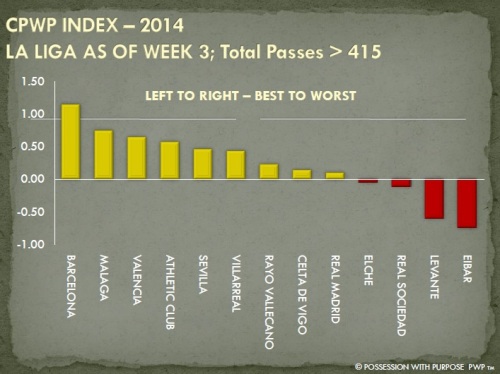 In terms of overall performance it would appear that there are roughly eight teams that average more than 415 passes while also generating other positive attacking outcomes.

Note that Rayo and Levante are in this mix… In considering the poor performances for Levante so far this season is it better or worse that they are attempting to mix it up with some of the other teams who are really – really good at passing?

I wonder if Levante also has games that are below the league average of 415 passes?

To answer that question here’s the CPWP Strategic Index where teams’ passing volume has not exceeded the league average: 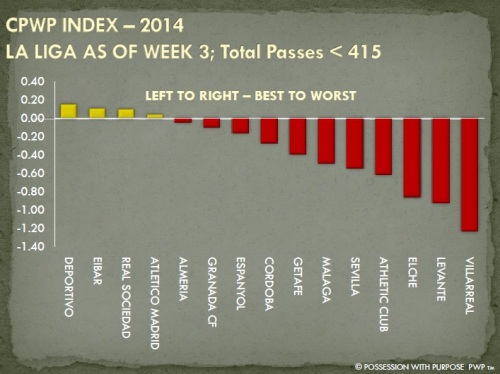 In answer to the leading question, yes Levante have games where their total passes fall below the league average.  And like when they exceed that figure they are near the bottom.

Only Rayo is not in the mix for the current bottom dwellers – again that seems to reinforce that Rayo may end up being a bit higher in the table as the season plays on.

In addition, note that Villareal were a better team in overall performance (positive ~.4) when exceeding the league average compared to (~-1.2) when falling below the league average.  Having played Barcelona skews that Index rating here I’m sure…. On the flip side they defeated Levante and drew nil-nil with Granada.

And of the teams that don’t pass a lot – does this show (already?) that teams like Deportivo, Eibar, Atletico Madrid, and Real Sociedad are better in counter-attacking and direct attacking than a team like Eiche, Villareal, or Athletic Club?

I’m not sure – but it sure does raise some interesting questions as PWP comes to La Liga.

Before moving on; I wonder how this Index will look at the halfway point of the season… time will tell.

A wrap up of sorts for the five bottom dwellers with a focus on overall passing accuracy:

Overall, even after just three weeks and the dominant indication on how passing influences CPWP, the Index is still not overly influenced by it when peeling back overall performance.

Still early days though, and the race to avoid relegation has begun.