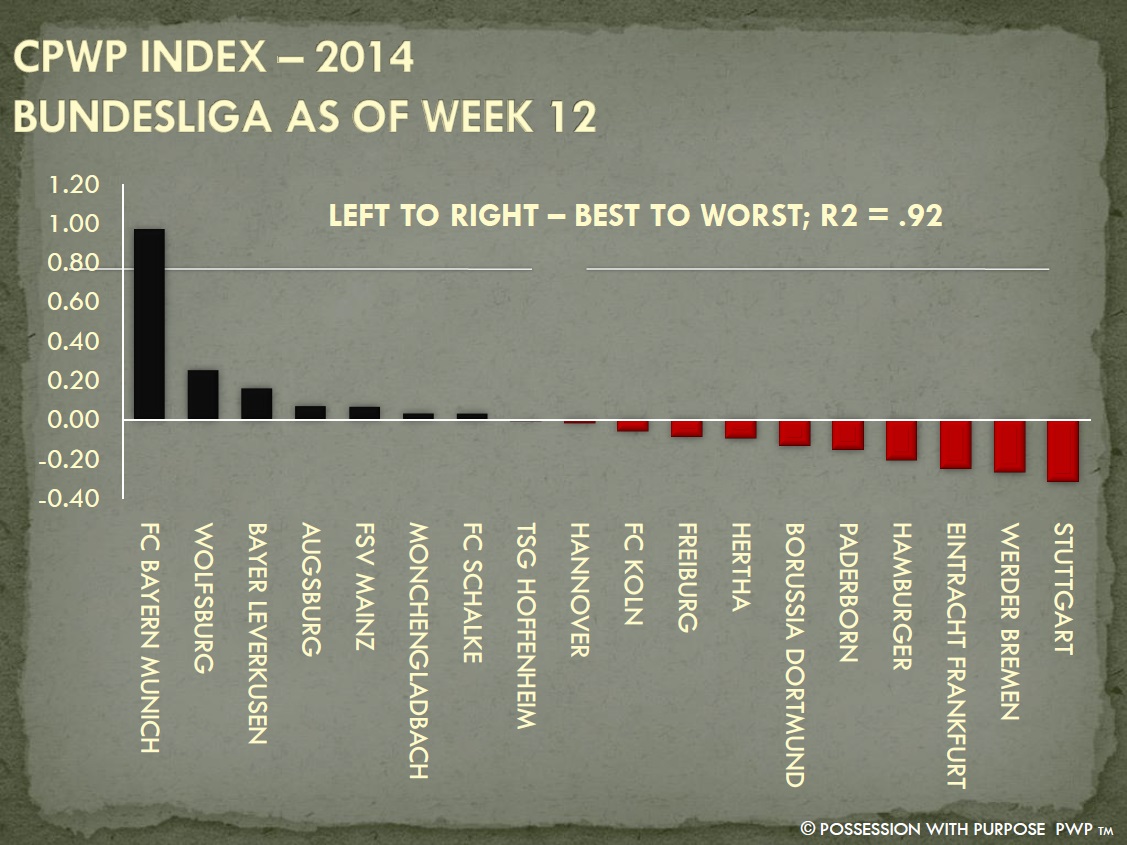 Is Borussia Dortmund really that bad?

Doubtful, but it’s results like these that are a nightmare for supporters, members of the Coaching staff and Front Office types alike.

So with the ability to evaluate team performance (outside of just results) what better team to run through the Possession with Purpose grinder?

To begin – my weekly update on the CPWP Strategic Index: 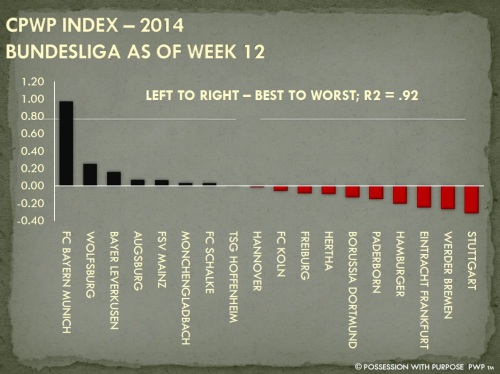 Not much difference.  So perhaps Dortmund is experiencing more than just bad luck?

The first place I’ll start is team Attacking performance compared to others; here’s the APWP Strategic Index for your consideration: 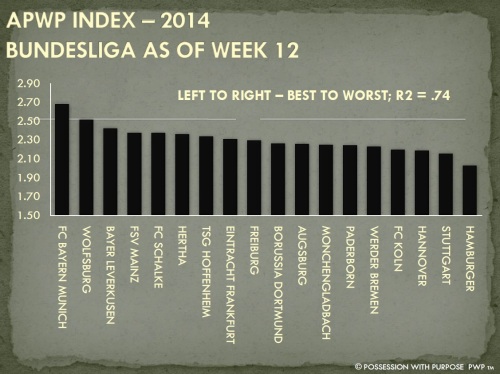 Since they average just 1.17 points at home and .67 points on the road I won’t peel back how they perform home and away – no point – there are poor in team performance either way.  For now the PWP key indicators:

Overall 57.51% (2nd highest in Bundesliga).  Can you say this team has no possession with purpose?

They are 2nd best overall in possession and tied for sixth worst in overall goals scored!

Now a game is not won or lost solely on possession – there is more to PWP, and the game, than that.

In other words they do a great job of passing the ball overall.  Oddly enough that passing accuracy of ~77% is still 1.25% below the average for teams in Major League Soccer.  I wonder… are the majority of players in MLS just as skilled in passing the ball as those in the Bundesliga?

Montreal Impact – who finished 4th worst in the MLS CPWP Strategic Index had an average passing accuracy of 76.90%; only .05% points different than Borussia Dortmund.

Is this an early indicator that the team performance in attacking IS as bad as it looks?

Percentage of Penetration per Possession:

Overall 24.19% (5th highest in Bundesliga).  It should be noted that a partner, at that position, is Werder Bremen, they sit just behind Dortmund at 23.90% and are just one point behind them in the League Table.

Of note, Dortmund’s passing accuracy within and into the Attacking Final Third is 60.76%; that average is still 5th highest in Bundesliga – so it’s not the drop-off in passing accuracy causing issues in attack.

I would submit Dortmund is getting shut down easier as they penetrate the opponents 18 yard box – meaning, for me:

Speaking again to this team not executing well enough to create the appropriate time and open space to take quality shots.  Recall that Bayern Shots Taken per Penetrating Possession was 13.27%; their overall Shots on Goal per Shots Taken shoots up to 40.54%.

Even Wolfsburg, who are 2nd to Bayern sit at 40.31% in this indicator.

Reinforcing, in my opinion, the need for Dortmund to do a better job in creating time and space!

Not much to offer here that hasn’t already been offered – the striking partnerships and attacking midfield support is simply not good enough to work their way past a packed 18 yard box… the quality needs to get better – and perhaps that quality gets better by slowing down the overall volume of passes and penetration.

In other words play the defense back-four a bit deeper in order to lull the opponent into over-committing a bit more…  a typical counter-attacking strategy used by many in the Bundesliga already.

If supporters who follow Montreal Impact are disappointed given how poorly that team performance was I can’t even begin to imagine how disappointed the entire family of Borussia Dortmund is at this stage of the season.

Some significant progress really needs to be made in team performance if this team is to get better results!

In moving on to Defending team performance and the DPWP Strategic Index:

Borussia Dortmund are 5th worst in the Index – so not strong in attacking nor defending team performance!

Noted, but as we’ve seen in all the leagues I analyze possession percentage, alone, is not a good indicator.

Given what I feel is a higher amount of counter-attacking football in Bundesliga this percentage is not surprising.

What is more surprising, however, is that the opponent’s for Dortmund have just a 49.33% passing accuracy within the Dortmund Defending Final Third.  That is alos 3rd lowest (best) in Bundesliga.

Basically what this means is the opponents of Dortmund really don’t pass the ball very well – or – they play longer balls or offer quicker play given Dortmund attackers being caught out of position during turnovers (anywhere).

For me, this speaks to Dortmund playing somewhat deeper and somewhat less aggressive in attack – in this case give up the idea of trying to emulate FC Bayern Munich and instead look to play more counter-attacking more often.

In adding up the details so far, Dortmund yield the 2nd lowest amount of possession, play opponents who are 3rd worst in passing accuracy and 2nd worst in penetration, yet they give up 1.58 goals against per game!

Again, the numbers are showing a very poor pattern of team performance.

Complete bollocks is what I would offer; their overall team performance really is as bad as their results!

Borussia Dortmund play against opponents who are downright terrible in possession, passing accuracy, and penetration, yet…

When it comes to Defending their own Final Third the opponents are downright SUPERB when it comes to taking shots, that end up as shots on goal and goals scored.

I did some analyses on the Portland Timbers this year – and their early pattern of defense showed the same results as Dortmund.

In the end, after at least two tactical adjustments in defending, the Timbers finally got squared away.  From a tactical viewpoint the corrective action was to drop deeper, roughly 10 yards deeper, and clog the 18 yard box a bit more.

In turn, this adjustment led to an increase in goals scored and a reduction in goals against.

Both of those articles on the Portland Timbers can be found here (Defense) and here (Attacking).

Perhaps this is a reasonable tactic that Dortmund take as this year continues?

I’m not sure, but another diagram to consider is the CPWP Predictability Index shown below:

In looking at the Predictability rating it shows Dortmund’s position excluding goals scored and goals against.  By all accounts this Index tends to support that Dortmund should be doing much better than they are.

One way to interpret this Index is to say that performance, outside and leading into the Final Third (on both sides of the pitch) is solid, where the weaknesses show themselves are in 1) the final creation/finishing, and 2) the final defending/goal keeping.

If that is reasonable then their current issues are not just down to one or two players; it’s more systemic.