My next installment on La Liga takes a look at Week 12 and compares how things have progressed or digressed for teams since Week 6.

If you’ve not followed my Possession with Purpose analyses in the past here’s a quick link to an Introduction.

Some movers to be sure, so to give the Index some context here’s a quick look at the League Table after Week 12 alongside Week 6:

The biggest movers up the League Table have been Malaga +8, Athletic Club +7, Levante +5, and Real Madrid +4.

On the down side both Almeria and Granada CF dropped six places, while Real Sociedad (and their new Head Coach David Moyes) dropped four, and Celta de Vigo, with Espanyol dropped three.

Now for the CPWP Strategic Index after Week 12; followed by how things looked at Week Six: 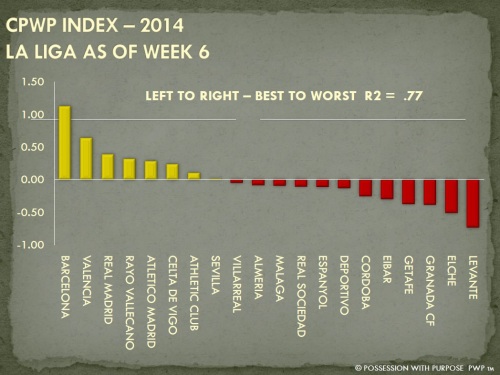 As a reminder, the CPWP Index does not react as quickly as team changes in the League Table – it’s a wee bit slower and more subject to change based upon a consistent change in team performance.

That being said Malaga (who moved up eight positions in the League Table) is 6th in the CPWP Index after Week 12 compared to 11th after Week six.

On the negative side Almeria (who has dropped six places) was 10th after Week six but is now 16th in the Index.

A solid indicator, again, that the Index will keep up with team changes in the League Table.

So what has happened, PWP wise, for Malaga and Almeria that may help us better understand their significant moves in the League Table?

To narrow the scope here’s the APWP Strategic Index for Week 12 followed by Week Six: 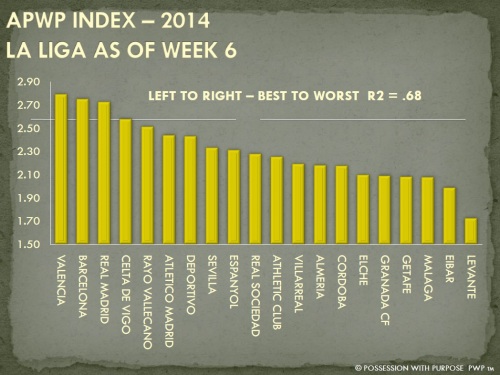 A shift of ten positions – it’s likely some attacking indicators have improved – but I’ll check the DPWP too before choosing which to peel back.

Not that much of a change, so perhaps it’s the DPWP key indicators?  Let’s see. 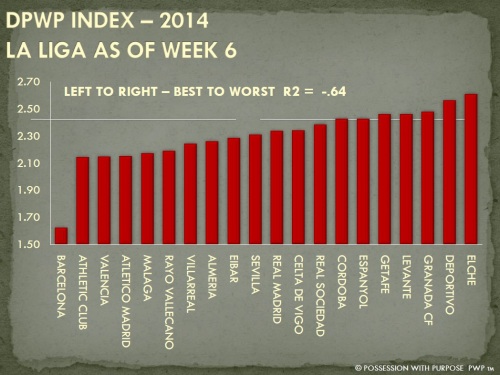 For Malaga they were 5th best in Week six and are 5th best after Week 12; clearly the change in team performance rests with the attacking side of the game.

For Almeria they were 8th best in Week six and are now 14th best, for me that means it’s their DPWP key indicators that have taken a nose dive.

So the grist for Malaga in the APWP Key Indicators:

I’d offer Malaga are playing shorter, quicker passes in order to gain penetration – while at the same time they are taking a wee bit more time to be selective in their shots taken.

The resulting outputs clearly indicate that this tactical change has led to more shots on goal and far more goals scored!

And given that the percentage of possession has not changed – I’d offer they have not dropped deeper to cede possession – they’ve simply decided to be more patient in their penetrating attack.

It will be interesting to see if this pattern continues to hold true through the next six weeks.

In moving on to Almeria – a team I’ve looked at a few times this year; here’s how their DPWP key indicators show what’s changed:

There are minor changes in how the opponent performs against Almeria leading up to Shots on Goal and Goals Scored – at that point the success rate of the opponent jumps 5% and then 11%.

While that might not seem like that much of a change, leading up to Shots on Goal and Goals Scored, there are many times in this game where it only takes four or five more passes, that are accurate, to change the outcome.

Given that I’ll also take a look at the volume of opponent activity as well.

What stands out to me is this:

Of course, what hasn’t helped is playing Barcelona two weeks ago – that being said – Almeria also gave up two goals to Elche, Villarreal, and Levante in this same six week span  – so it’s not just down to playing Barcelona!