If you follow the Rapids I’d expect you hope for a far better season coming up than what you saw in 2014.

Just how ugly was it?  Well……  they weren’t near as bad as Houston, San Jose, Chicago, Montreal, or that defunct team called Chivas, but they were pretty bad compared to the rest of the West.

And with the addition of Sporting KC and a newly revamped Houston, led by a very crafty Owen Coyle, the hill to climb will be even tougher.

In saying that my End of Season run continues with the Colorado Rapids; here’s links to my other End of Season Analyses plus my link to what Possession with Purpose Analyses is all about:

My Revised Introduction to Possession with Purpose

New for this article, and future End of Season analyses, are my Game to Game Diagrams trending team performance throughout the season.  More to follow on that…

In addition, in offering up my information, I’ll look to identify strengths and weaknesses that also include my thoughts on what primary positions the team may need to upgrade in order to be more successful next year.

To begin, as usual, the CPWP Strategic Index: 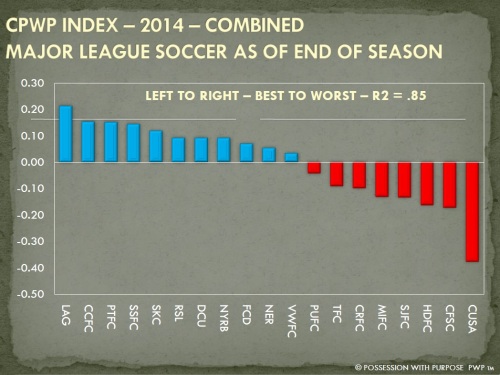 Meaning Pablo Mastroeni has a multitude of “higher quality” boots he needs to find in order to compete in what should be an extremely tough Western Conference next year; especially with the addition of Kansas City and Houston Dynamo.

Of course the challenge here is that every team is looking to get better next year – and while they’ve added Michael Harrington as a Fullback I’d imagine they need to do “Moor” than just that… anyhow – moving on.

So where to begin on what positional areas need upgrades?

Defense First – here’s a look at where Colorado finished in the Defending PWP Index:

I’m not sure, but here’s their trends from game 1 to game 34 in Defending:

Throughout the course of the season it seems Colorado had the majority of possession compared to their opponents; indeed the opponent averaged 49.14% possession.

In general it appears that the opponent was more likely to cede control of the ball, for the most part, when visiting Colorado – while Colorado appears to have ceded control, somewhat, when traveling.

In considering the overall opponent possession percentage I’d offer it was not a significant, single indicator, that drove overall poor team defending performance – we’ll have to look elsewhere.

Quick explanation – I’ve added another statistical calculation into my analyses – in this case, and with all the following diagrams, I’ve added the mathematical equation of the Trend Line for the stretch of 34 games.

What this shows is whether or not there was a trend in team performance – for example – in the Opponent Possession Percentage I’ve indicated there is a Slight Positive Slope – this means, over the course of 34 games the opponent had a tendency to increase their amount of possession (from game 1 to game 34).

For analytical purposes a trend line may be used to spot increases or decreases in team performance – in this case I’ll refer to the loss of Drew Moor (I think around game 23) as a point of interest.

If I had to draw a conclusion it would appear that after game 23 the Rapids opponent possession percentage increased – it did – by a margin of 5% points.

As a point of interest – in EVERY instance except Shots Taken per Penetrating Possession – the opponent’s of Colorado either increased their volume of activity or improved their team percentages in execution from Game 24 to Game 34 versus Game 1 to Game 23!

As I’ve noted many times – I’m not an analyst who digs into how individuals impact their team performance on a regular basis – but it would be rude not to identify such compelling information as this.

The trending increase isn’t all just down to one Center-back – Midfielders and Fullbacks (with appropriate positional play) have a significant role in decreasing opponent passing accuracy!

This trending increase, like above, is not all down to one Center-back missing; the same applies here for Midfielders and Fullbacks as well…

And with a slight negative trend it did mean the opponents offered up fewer shots; but in cases like these the opponents usually ended up putting more shots on goal and more goals scored.

Opponent Shots on Goal per Shots Taken: (Below)

So that overall status is not down to just missing one Central Defender – it’s more than that as they’ve been pretty poor in this category across the entire length of the season.

And yes, reduced Shots Taken does see an increase in Shots on Goal so the real pain begins to show… 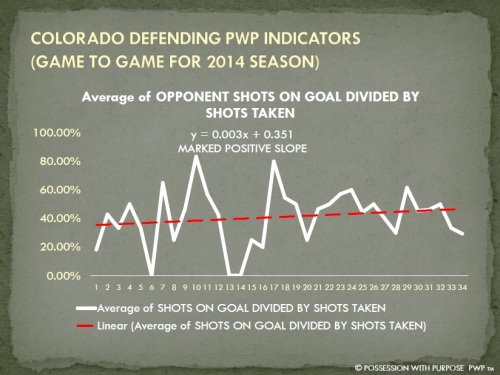 Opponent Goals Scored per Shots on Goal: (Below)

Regardless of the loss of Drew Moor – it shouldn’t be down to the loss of just one player to see such a huge trend in allowing goals scored against… wow… more than the addition of Michael Harrington and the return of Drew Moor is needed here. 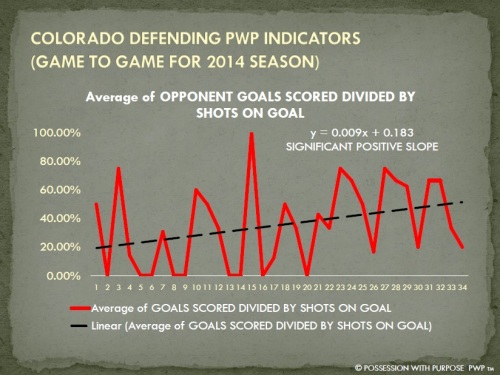 As I’ve noted before – rarely do I focus team analyses with respect to the influence of one single player – but in this case an exception needed to be made.

But… these increases in opponent execution are highly unlikely to be down to the loss of one player – Midfielders and Fullback have a role in this effort – and any Head Coach knows that if there is a weakness in one particular area then the rest of the team needs to help steer the opponent out of that area… in looking at this information it would appear to me that Mastroeni failed to get the rest of his starters to do a bit of extra work in defending!

Moving on… as with any game – if the defending side of team performance takes a hit it is likely the attacking side of a team performance will take a hit – as I work through the Attacking PWP I’ll offer up the “with and without” Drew Moor there as well.

All told it would appear that the Colorado Rapids fell far short on the Attacking side of team performance – 5th worst, overall, in MLS.

Overall 7th highest in MLS at 50.86%; but we’ve seen that can be a deceiving statistic when looked at on its own.

In this case productivity did not drop – it stands to reason, then, that upon entering the Opponents Defending Final Third their productivity in creating Shots Taken, Shots on Goal and Goals Scored should not drop either; let’s see?

Shots Taken per Penetrating Possession: (Below)

Overall 2nd highest in MLS at 20.59% – not a good sign for a team that is supposed to appear like a possession based team – this number should be on the lower end to support patience and drive shots on goal up.

With respect to the presence or non-presence of Drew Moor… in this case their Shots Taken percentage increased – meaning (with a downward trend line) they took more shots with Drew Moor on the pitch than they did without Drew Moor (13.64 without Drew) – (14.09 with Drew)…

And, it also, probably means, they were less patient in their shot taking towards the end of the season – i.e. – playing more Direct Attacking football – again the percentage increase supports that given all the other leagues I analyze showing the same trends. 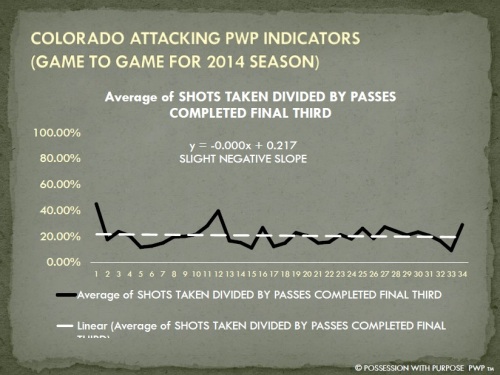 Shots on Goal per Shots Taken: (Below)

So without Drew Moor they not only took more shots they put more shots on goal – as such team productivity in creating and taking shots did not digress – but – there is a negative slope – which means compared to the earlier part of the season their overall percentages in putting shots on goal did decline.

For me this speaks to weaknesses in attack in addition to the weakness associated with the loss of Drew Moor.

The telling indicator here is Goals Scored per Shots on Goal…

Goals Scored per Shots on Goal:  (Below)

A considerable drop-off —> especially when considering that Moor is a Central Defender – and unlikely to generate a huge negative impact in the attack.

Nevertheless, without knowing their overall position compared to other teams in MLS it does reinforce to me that the Colorado Rapids had significant weaknesses in their attacking tandem.  Even more so given that their percentage of shots taken and shot taken that ended up on goal increased considerably as the season wore on.

To confirm… in this category the Rapids were, overall, 3rd worst in MLS at 24%.

Nailing it that this team lacked quality strikers given their higher than average shots on goal, compared to other teams in MLS…

All told, I’d offer that the loss of Drew Moor had minimal impact in the overall lack of attacking team performance, and especially the lack of overall finishing as the Rapids entered the opponent’s defending final third.

This team has more issues in attacking than just the loss of Drew Moor – adding some better Fullbacks and perhaps a wider midfield player (or two) should help as well as revamping their striking tandem.

In addition, I’d also offer that Mastroeni lacked leadership, direction, and effective tactics on the attacking side of the pitch as well.

For me, adding Michael Harrington is a patchwork approach – he was pushed out in Sporting KC and pushed out in Portland – both teams were better defensively when he was moved out.

So while the return of Drew Moor will help the defense solidify – it’s still major surgery to really prepare this team for what appears to be a very brutal Western Conference next year.

3 thoughts on “Colorado Rapids, The Loss of Drew Moor was More or Less?”