The Toronto Front Office made a decision to sack Ryan Nelsen, on 31 August 2014, after winning just three of his last 13 matches.  I don’t know the rationale for that – other than what was offered on the surface – the team wasn’t getting results.

That’s a clear enough reason for most but not for me…  I’m a firm believer there is more to this game than just scoring goals; for me it’s about the opponent not scoring goals as much as it is about scoring goals yourself.

To be sure – this isn’t me taking the position that playing negative football is ‘the’ solution – on the contrary – I love attacking football; but part of attacking means great defending.

However viewed I will continue to let the statistics tell me what they offer and not the other way around.

Before digging into Toronto here’s links to my other End of Season Analyses and what Possession with Purpose is all about:

Colorado Rapids – The Loss of Drew Moor was More or Less?

My Revised Introduction to Possession with Purpose

For statistical purposes, Ryan Nelsen was sacked on 31 August – that means Games 1-24 were under Nelsen and Games 25-34 were under Craig Vanney.

I’ll include how the team did using those two filters as well as an overall picture on where Toronto finished compared to the rest of MLS.

In closing, I’ll offer up final thoughts on team performance under the leadership of Nelsen versus Vanney – some opinions on that and then opine what positional upgrades may need to be made in order for Toronto to make the Playoffs next year.

To begin, as usual, the CPWP Strategic Index:

There’s TFC; 7th worst in the CPWP Index (between the Union – PUFC and Colorado – CRFC).

In terms of Goals Scored, under Nelson they averaged 1.46 Goals Per Game (GPG) – under Vanney that number dropped to .90 GPG.

From a Defending viewpoint their Opponent GPG went from 1.63 under Nelsen to 1.50 under Vanney.

So while the Vanney led Reds did see a slight decrease in Goals Against – that didn’t make up for the significant decrease in GPG produced in Attack and clearly played a huge role in them dropping more than .5 PPG under Vanney – compared to Nelsen.

From a purely statistical (results) standpoint the sacking of Ryan Nelsen did not appear to give the Reds what they needed to make the Playoffs!

As noted, my viewpoint there is more to soccer than Goals Scored and Goals Against – given that here’s my Family of Possession with Purpose Indicators to see what else is available to consider. 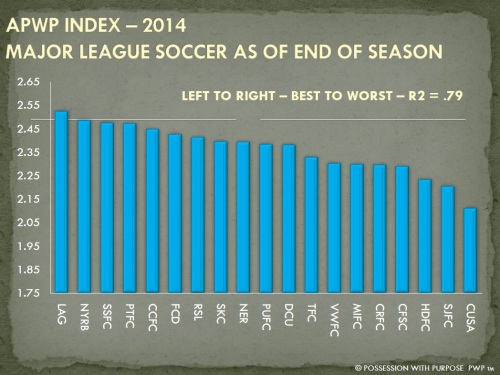 All told, 8th worst in overall Attacking PWP – note that the R2 is .79 – not nearly as high as the overall CPWP Index (.85) but still very strong.  Meaning, for me, the parts that comprise this Index have value.  So on to the pieces…

An explanation about the following new diagrams below — each PWP Indicator is offered in a Game to Game view with a different colored ‘trend line’; the trend line is offered so that you can see how the team changed, from start to finish, in each area of evaluation.

For the statistical folks I have also included the slope.  I won’t reference the slope but some folks have used the slope to predict future expectations.

Clearly Toronto changed their pattern of possession as the season progressed.

Overall they were 10th in MLS – if they had stuck with Nelson the entire season it is likely they would have been 4th or 5th lowest overall – with Vanney at the helm for a full year chances are they would have finished 4th or 5th highest.

I’m not sure a more diametrically opposed tactical approach could be seen given this information – it will be intriguing to see what impacts there are as we dig deeper into team performance.

And when looking specifically into the Attacking Final Third Passing Accuracy increased by almost 2%.

Overall, their volume of passes, per game, also increased from 382 under Nelsen to 463 with Vanney.

Finally, team Passing Accuracy increased from 74% to 81% under Vanney.

Recall that under Nelsen they had a higher GPG and PPG than with Vanney.

So… while they increased possession and accuracy they didn’t increase control of the game in attack. 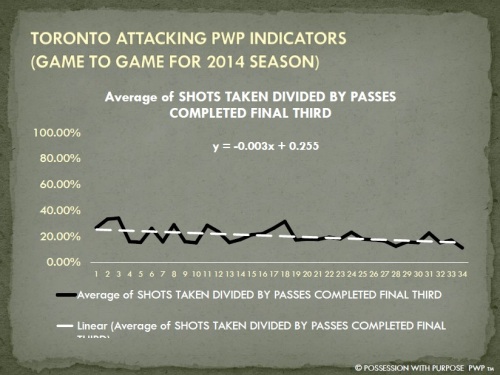 Perhaps two of the more difficult PWP Indicators to interpret.

For the Barcley’s Premier League, La Liga, and the UEFA Champions League we already know that Less means Less and More means More.

That is not the case, at least for now, in MLS nor in the Bundesliga.

In these two Leagues the less you possess and less effective you are in passing the more likely you are to win.  Read here if not convinced.

So bottom line here – these two indicators can be very tricky – for now I’ll just offer that an increase in possession and passing accuracy only led to a very marginal increase in penetration but a marked decrease in shots taken.

Overall they were 12th highest for the year compared to the rest of MLS.

Overall they were fourth highest in MLS at 20.23%. 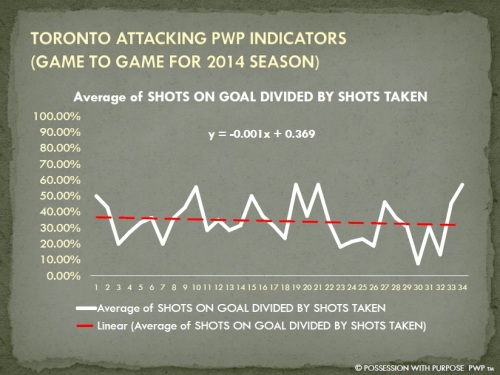 So the ugly picture takes shape – as Possession, Passing Accuracy, and Penetration increased, the percentage of Shots Taken and Shots on Goal decreased.

So the publicized bottom line, by the Front Office, was all about Points won or lost (results) hmmm……..

Is it stating the obvious that under Craig Vanney, the Reds were worse, in finishing, than Chivas?  Let’s check again their Goals Scored per Shots on Goal.

Last and surely the least…

All told they scored just nine goals under Vanney – three of them against Portland in the wild come from behind meltdown by Portland (3 goals in the second half) and three goals against Chivas USA.

Recall the very first diagram on Possession Percentage – bottom line here is while the team itself appeared to control the game more under Vanney – they didn’t.

They actually possessed the ball more but failed to execute that possession with purpose.

In rounding out what positional upgrades may be needed, for me, is pretty clear.

They need an upgrade in strikers and supporting attacking midfielders so that Bradley actually has some talent to work with.

And yes, I got it – the tactical attacking system changed and the new Head Coach will want to bring in ‘his players’ to play ‘his style’; thought Toronto had already been down that road a few times already.

For me, players are players – some are gifted in some areas while others are even more gifted in other areas.  But any Head Coach knows that if the intent is to WIN – then the intent should be to develop an attacking tactical system that will help the team win.

In this case Craig Vanney didn’t…  so how about Defending – did Craig get it right on the defending side of the pitch? 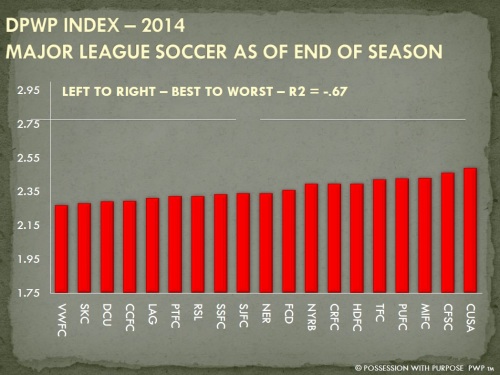 Fifth worst, overall, in MLS… so were things better or worse under Vanney, versus Nelsen?

Not a great place to start but we already know their Goals Against per Game was lower under Vanney’s leadership than Nelsen’s – so it can’t all be bad.

But 5th worst in MLS does give the indication that although Vanney’s approach helped the team get better they still ceded 1.50 goals per game and that single statistic is still 4th worst across MLS.

So for some that means the opponent had less control over the game than Toronto – but we already know the goals against only dropped marginally – leading me to sense that major upgrades are needed almost across the entire back-four.

Through the course of the season the one, pretty consistent statistic for Toronto, was Opponent Passing Accuracy.

Overall the opponent’s were 5th worst in completing passes against Toronto – their opponents averaged 76.39%.

Of note is Opponent Passing Accuracy, within their Defending Final Third, was 63.07% under Nelsen and 64.90% under Vanney.

Put another way – Nelsen ceded possession and passing accuracy to the opponent ‘outside’ the Defending Final Third. 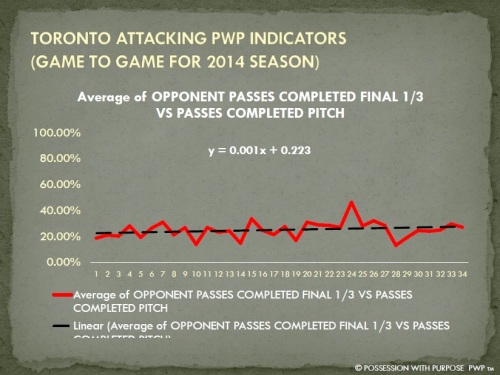 Like in attack these two indicators can be the hardest to interpret – as such I’ll just offer the statistics with one caveat.

Under Nelsen, Toronto ceded their opponents 25.02% penetrating possession while with Vanney it was 25.06%.

Not much difference here between Nelsen and Vanney led teams – overall they ceded the 2nd highest percentage of penetration in MLS.

With respect to Shots Taken per Penetrating Possession, the Nelsen led team had opponents execute this step at 15.25% – while opponents with the team led by Vanney saw that number increase up to 20.02%.

I should add an observation here – low does not mean good sometimes.

What I have found over my two years of analysis is that when the opponent is a bit more patient, in taking their shots, they have a tendency to be more accurate (regardless of location).

This is amplified even more if the defending team plays higher up the pitch – meaning, even with less patience, the opponent is still getting more time and space (given midfielders are caught out of position on quick transitions) – thereby leading to more effective shots on goal. 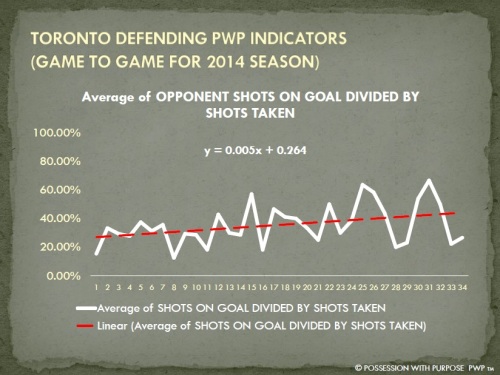 What’s interesting here is that under Vanney the opponent percentage was 42.82% – while under Nelsen it was 32.52%.

One would think that the Goals Against would be lower under Nelsen.

Perhaps, in time, it may have been but for that stretch it wasn’t.

In looking at volume; the number of Shots on Goal also increased (Vanney – 5.20 SOG/Game versus 4.17 SOG/Game under Nelsen)!

Yet Goals Against decreased?

Well I ask that a bit tongue in cheek since they were 10th best/worst in this category at 35.55%; meaning however viewed they have plenty of room for improvement. 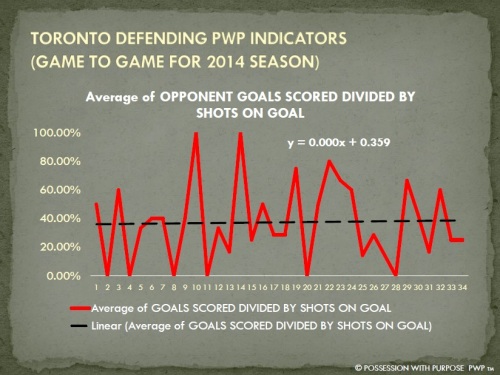 That could be heartening for Toronto supporters – if viewed as a glass half-full – that 29% (over the course of a season) would have been 7th best in MLS.

With a glass half-empty the volume and accuracy of the opponents was very high – leading to an overall 1.59 goals against – worst in MLS.

I think it’s reasonable to offer that the overall team performance in defending was not up to scratch under either Head Coach.

While Craig Vanney got the team to reduce the opponents possession – the opponents were still blindingly successful in taking points from Toronto.

If the intent is to make the Playoffs, as it has been for over five years now, then I think the Front Office probably needs to suck it up just as much as the team does on the pitch.

Inconsistency, across all facets of Football Operations, is what I see and hear.

And to be brutally honest I think this team probably needs at least 6-7 new starters – three defenders, two midfielders and at least one striker.

As such, I submit the Toronto Front Office should review their own decision-making videos, over the course of five seasons, and LEARN from their mistakes too…

If this was an independent club, in a purely capitalistic business model, (promotion/relegation) this team would be down in Division 3 by now… wow!

Between Games 12 and 24 the other teams in MLS had figured out their approach – and Toronto won zero games, with those same ‘ceding time and space tactics’…