For most, the stunning team this year continues to be Southampton – worthy view as the Saints continue to march towards Europe.

I’m not on their bandwagon yet as nearly half the season remains – but if they keep up their team performances, as they have the first 21 games, it is likely they squeeze out either Man United or The Arsenal…

Wouldn’t that shake up things up a wee bit?

As for now, here’s my CPWP Index and how the teams compare, in overall performance without using points, after Week 21: 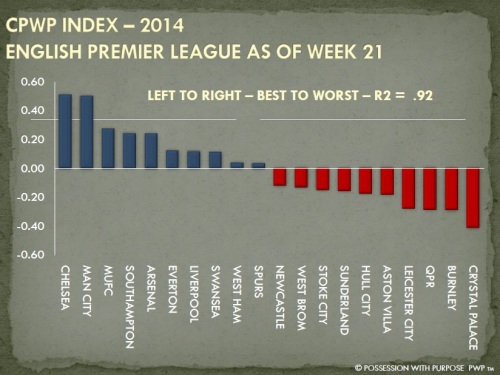 There appears to be a four tiered level of performance so far – with Man City and Chelsea at the top; Man United, Southampton, and Arsenal next – followed by Everton, Liverpool, and Swansea – while West Ham and Spurs continue to stay in the race.

Even here Southampton are near the top – it’s no fluke they are where they are in the League Table.

As for West Ham and Spurs – those two London sides, along with The Arsenal need to pick things up a bit or they may be stuck in Europa League next year.  Somehow for The Arsenal I don’t think that’s a goal… Allardyce and Pochettino —> maybe?

But Wenger, no – it would likely lead to many dissenting voices and the unwise move of sacking him.  Personally I think he’s one of the best Head Coaches, ever, in Soccer…

So you know – since Pardew was sacked by Newcastle, prior to Game 21, I will be able to do a compare and contrast later this season – especially since he’s now coaching Crystal Palace… I wonder how those two teams will look at the end of the season?

I’ll also poke around West Brom too; now that Pullis is in charge. 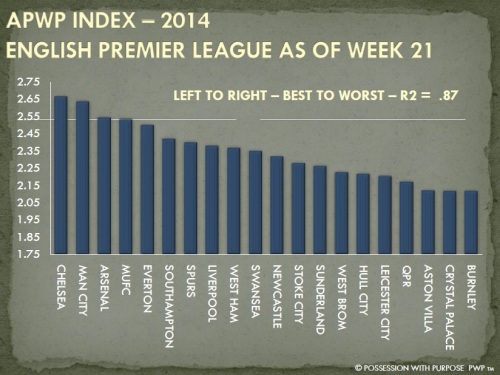 If I were a betting man I’d bet Newcastle brings in some defensive support rather quickly – if they don’t perhaps they fall as far down as the relegation zone?

Liverpool clearly need more support up top – they lack goal scoring and there is the Capt. Obvious that Suarez is missed – clearly Balo-telly is lacking.

West Ham continues to punch way above its weight – can they sustain that approach?

I’d also imagine Spurs will look to do the same thing – they are surviving because Kane scores goals – but as seen this last weekend – they are also taking it in the shorts because they can’t prevent goals against.

Giving away two goals to Crystal Palace is shameful…

Wow – might DeAndre Yedlin get a look in soon?  He had 60 minutes with the youngsters the other day but may need another few weeks to get adjusted; time will tell.

I include this for others more than myself.

But since home teams won 155 times in MLS, as opposed to losing just 77 times, it’s a good bet the home team wins or draws every single game regardless of any predictability model.  For more details on that information read here:  The Comforts of Home in MLS.

I make no case that this IS a solid betting tool but many bet on soccer and the usual predictability products vary in accuracy with a reasonable model offering up 30% accuracy.

In other words, one team may show a reasonable (game to game) correlation between possession and winning while another team may not.

A good example – Stoke City averages roughly 48% possession – their game to game correlation of possession to points earned is (R2) -.52 – meaning — over the course of this season so far Stoke City are more likely to earn points if a particular games’ possession is less than their average.

On the other hand a team like Chelsea – who averages ~58% possession has an (R2) correlation of .13…. meaning their is simply NO RELATIONSHIP between possession percentage and taking points in the league table – they can pretty much take points by either falling above or below their league average of 58%.

I will be doing a new article on Possession in the very near future – it’s an intriguing statistic that is abused in a big way – an aggregate R2 of .77, for a league, does not mean Possession is the overwhelmingly best indicator for team success.

It’s the winter break for me just like it is the teams – plenty going on to include co-hosting a podcast with Stephen Brandt (@Yellowcardedpod).

Our upcoming guests, in the next two months, include Commissioner Peterson from the North American Soccer League, Jamie Clark, Head Coach for the University of Washington, John Galas, Head Coach Lane United FC (USL PDL), and someone from the Portland Timbers organization – to be determined.

A new article, to be published by @7amkickoff, will speak specifically to how The Arsenal is performing in some key (game to game) areas.  This is hopefully the first of many articles where my PWP approach will be leveraged by other highly respected writers…

To set the stage for future articles leveraging PWP @7amkickoff provides his introduction to this approach as well as a great synopsis other Soccer statistics in general, to include Total Shots Ratio, published by Grantland, and Michael Caley’s discussion on Expected Goals.

So if you’re a writer, with an interest in leveraging my analytical approach, as part of the overall product you provide your readers let me know how I can help with that.