For me, it’s not the top two that peak my interest this week, it’s the prime movers from mid-table – downwards while looking at the League Table from Week 12 to Week 19.

Here’s how they stand comparing Week 19 to Week 12:

The teams highlighted in Green and Red I”ll get to in a bit, for now note the positional changes have been significant for many teams in and out of the lower half.

For those interested the CPWP Family of Indices continue to have strong correlation to the League Table without using Points Earned in the calculations.  Here’s how the Indices show things from a team performance standpoint through Week 19:

For those new to the Indices here’s an explanation on how they are created.  No other publicly created set of Indices comes any closer to the League Table – not even Expected Goals – a popular Predictability statistic.

I should point out that these Indices are not Predictability Indices – they are not built to predict the future based upon past data – but……..  this Index, developed from the PWP Process is a Predictability Index: 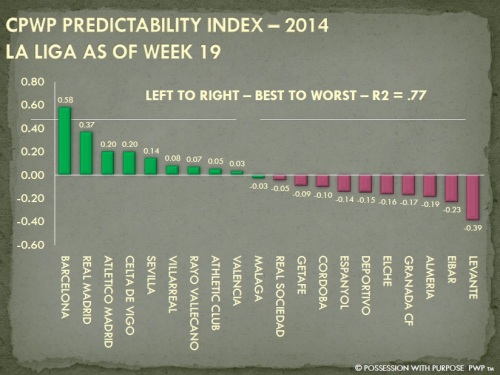 The caution I offer in using it as a forecasting tool is this – when developing a forecasting model you need at “x” amount of samples to reach 95% Confidence Level in your data and its ability to represent trends for the future.

The “x” amount of data needed for this Index is at least 15 games — since games is the primary sample point.  The twist is that since teams behave, for the most part, somewhat differently at home versus on the road you need 15 games of data at home and 15 games of data away from home.

But, you say, the R2 is .77 – agreed – so yes, I would venture that those who like to gamble might want to rely on this tool to help them pick a winner – I did a test run in Major League Soccer, where the home and away statistics are notoriously different and my test run varied in success – straight CPWP PI # of one team compared to another.

Back to the movers in La Liga these last seven weeks…

In reviewing the APWP Index for each team, from Weeks 1-12 and Weeks 13-19, only one team has seen their Attacking Index increase, Cordoba – all the other teams have seen their overall attacking performance drop slightly during those two time-frames.

Why has Cordoba shown an increase?

It’s down to improved accuracy in Scoring Goals based upon Shots on Goal – all others have experienced slight decreases in quality; either with respect to percentages of Shots on Goal, Shots Taken per Penetration, or Goals Scored from Shots on Goal.

Clearly Cordoba has improved on both sides of the pitch, while with the others it’s slightly more difficult to pin down a specific area…

A few interesting notes here are:

Cordoba showed improved performance on both sides of the pitch while the others didn’t…  (perhaps???) this means that some of the new positions, for these teams, are as much a function of how others have gotten better, or worse, as it is a function of how those teams have, themselves, gotten better or worse…

Meaning position in the League Table, even when seeing changes by as much as six or seven places, may not mean that individual team is playing better – it may mean that other teams, with less noticeable drops in position are playing worse…

Reinforcing again that predictability is not solely associated with goal scoring – it’s also a function of not scoring because some teams are doing better, however slightly, with improved defending but not improved attacking…

If you are a writer for any team in the Bundesliga, La Liga, Barcley’s Premier League, or Major League Soccer and you’d like to use outputs from my Possession with Purpose Family of Indices in your articles please let me know…

I can provide a broad range of support that may help you better tell the story, (explain) to your readers, what or how well your team is doing compared to others… or even itself given certain time-frames (before and after a coach gets sacked, player gets injured, etc…)

If you’d like an example of the type of support I can provide please read this latest article by @7amkickoff.