There appear to be seven teams in the real run-up to who makes Europe next year with the top four going for the major prize and the fifth team relegated, if you will, to the Europa League.

I’m sure that isn’t ideal for the likes of Arsenal, Southampton, Man City, Man United, Tottenham, or Liverpool but someone’s gonna get fifth and that’s a damn sight better than sixth or seventh!

As for any outsiders squeaking in – perhaps Stoke City has the best chance considering their schedule for the next nine games, but even maximum points, excluding predicted losses to Southampton and Chelsea probably still don’t see them making fifth.

So how did the teams do mid-week and how did that compare to what the CPWP Predictability Index offered?

Of the ten games the Index was only pear-shaped twice – the somewhat stunning loss Swansea had to West Brom and the ever odd-team Sunderland and their loss to QPR.  Otherwise where the Index predicted a team would garner points they did.  Eight of ten and in only two of those matches did the predicted teams take just one point as opposed to three (Newcastle v Crystal Palace and Southampton v West Ham).

So for three weeks now that’s at least seven games each week where the Predictability Index got it right; eight times in the first effort, seven times the second go-round, and eight times this go round.

By the way – here’s what I said last week about Aston Villa…  Figure plenty of faces from Steve Bruce and some tense times for Paul Lambert – it is likely a loss here, to Hull City, will add another nail to his coffin… I wonder how Paul Lambert would do managing a team in Major League Soccer?    Obviously Paul Lambert was sacked – I guess that was the last nail!

Sorry to see Lambert get the sack – he certainly has shown good pedigree – perhaps he finds himself leading another team next year into the Premier League – or perhaps???  he finds himself getting out of the promotion/relegation battle as a Head Coach and works his way across the pond where the chances of leading a team to a championship are more than just who has the biggest wallet…

Before getting to the next BPL week of predictions here’s a diagram on how the teams stack up in the Possession with Purpose Index (through week 25) alongside how the teams line up in the League Table (the R2 at Week 25 is .91): 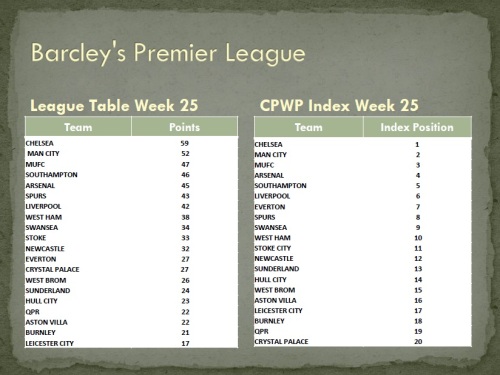 Now for the next round as the big boys prepare for Europe tomorrow…  here’s the Predictability Index as things stand today: 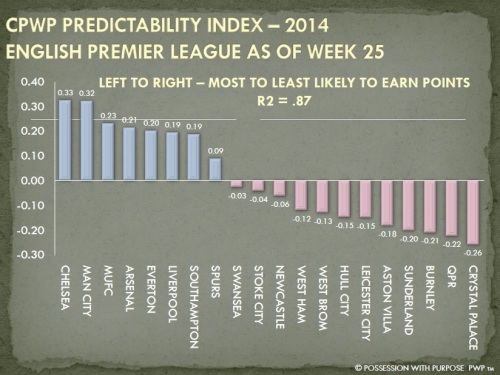 The next round sees:

Aston Villa v Stoke City:  Stoke City should earn the points here and this (could?) be the beginning of a stretch where Stoke may maximize 21 points out of 27 in the next nine games.

Chelsea v Burnley:  Chelsea should earn maximum points here but on short rest it is likely the squad taking on Burnley will have a few regular non-starters…

Crystal Palace v Arsenal:  Arsenal should take maximum points here but given they have Monaco in four days time it is likely, they too, rest a starter or two.  Intriguing here is that Monaco is a team who likes to cede possession – with that perhaps Wenger has one or two players going back to back games that we might not normally consider happening.  Both games are a must three points given the severity on what’s at stake…

Sunderland v West Brom:  Although playing away from home I can still see West Brom earning at least a point here.

Swansea City v Man United:  United really need to continue taking maximum points and this game may take the shape where Swansea actually wins the possession battle but loses overall control when it comes to goals scored.  United earn points in this one.

Man City v Newcastle:  Like Arsenal, Man City have their Premier League game first – they need three points here or even the confidence of making Europe next year could come into question…  Man City earn points.

Spurs v West Ham:  Again a wicked good London derby – I see Spurs taking maximum points here but never-ever doubt the will of Allardyce and the Hammers – Sam would be glowing if he got three points but, in the end, I think he would settle for one…  I doubt Spurs think the same way on that score…

Everton v Leicester City:  Martinez needs his team to take three points here – anything less would begin to fuel the talk that perhaps another leader is needed to manage the blues…  or at least it would be crystal clear their current set of strikers really suck…

Southampton v Liverpool:  This is the best game (outside of Spurs/Hammers) this next round – a can’t miss if your any type of football fan!  The Saints are not underdogs here – I see them as favorites even though the Pudlians are on a bit of a run…  Koeman v Rogers…  game on – Saints should earn the points here – if not – then perhaps the chrome fenders are beginning to show some rust?!?  As for Rogers – he really needs to get points here to!?!

I am expanding my support for other writers later this week as I’ll be providing Ed Bottomley (Dixies Sixty) some grist about Everton so far this year.  I’m not sure how the final article will look but when written I’ll provide a link here.  For now I’d just offer that Everton are the Borussia Dortmund of the Bundesliga or Borussia Dortmund are the Everton of the Barcley’s Premier League…  neither one are in an enviable position, excluding of course, Dortmund has made it to the next stages of the UEFA Champions League this year.

If you’re writing for your favorite team and your like Tim (@7amkickoff) or Ed (Dixie Sixty) and you’d like some PWP grist for your articles let me know.