For over two years I’ve been researching team and league statistics to help paint a picture and perhaps? better explain what is happening on the pitch relative to points earned in a league table.  For the most part every competition measured, MLS 2014, English Premier League, Bundesliga, La Liga, and the UEFA Champions League have all shown a pattern of consistency.

This pattern isn’t relative to individual teams that win or lose (earn points) it’s relative to the behavior of the league/competition as a whole.

To give you an idea of what I mean here’s a diagram on how each of the six data statistics I track in Attacking Possession with Purpose correlate to points earned for all the teams in those leagues. 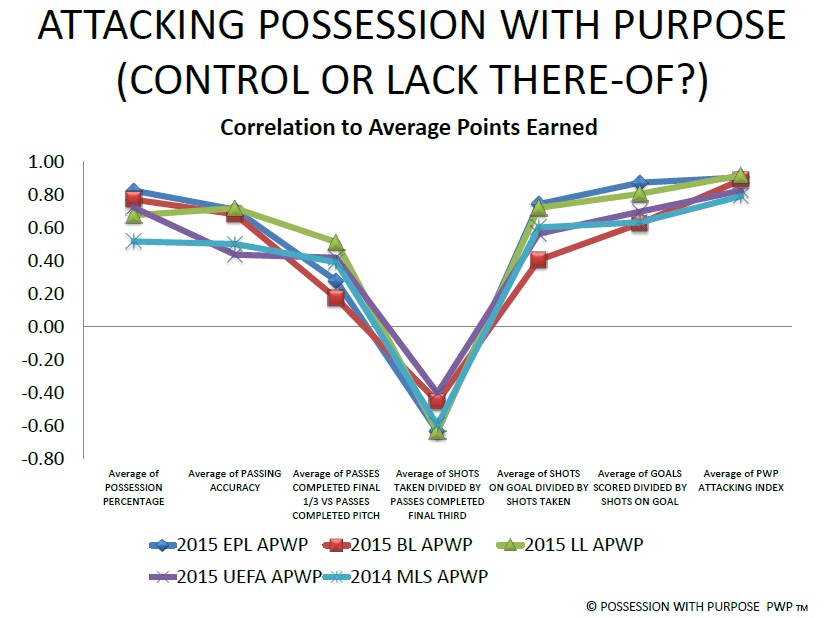 By correlate (statistically speaking) it’s the correlation coefficient between each data point and points earned – for those using statistics that is called “r”.

Said differently — there is a consistent pattern of league behavior relative to all leagues measured for team attacking.

What’s kinda cool (for me) is the pattern of information shows up as a bird – with the brains (head) of the bird located in the center (v). And that center (v) in soccer usually represents where the asset of vision comes into play; the better the completed pass into a danger area (attacking final third) the more likely it is to create a shot taken that has a better chance of resulting in a goal scored.

Here’s a look at the same diagram with the MLS 2015 information (red line) and the Portland Timbers information (green line) in comparison to the other leagues: 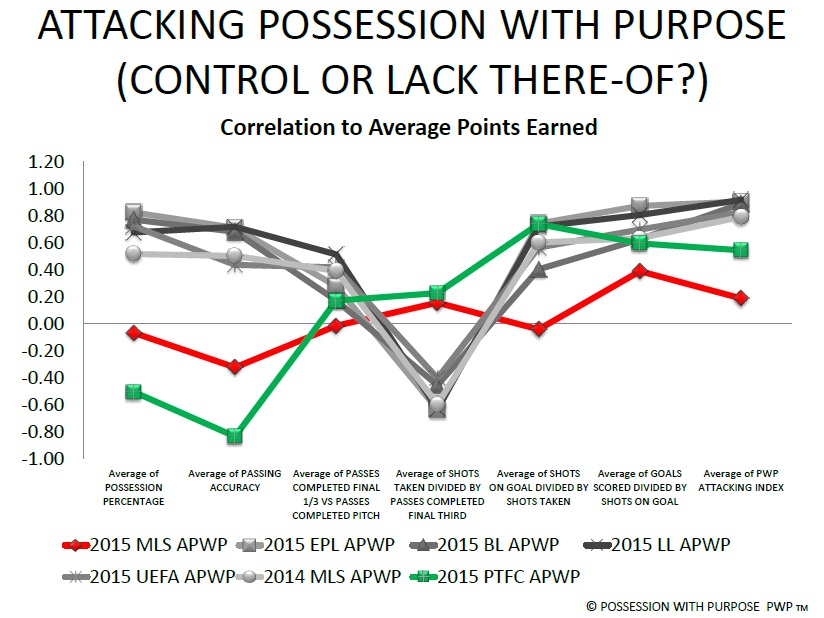 In looking at MLS 2015 (red line) Possession Percentage – there is virtually zero corrleation to points earned – meaning it simply doesn’t matter how much possession (control) you have in a game in MLS.

This isn’t true for Portland however, with Possession Percentage (green line) hovering around -.50 this means the less possession Portland has the more likely they are to earn points – said another way – the more direct the play (this year) the better the odds they take points.

A takeaway here, on the Timbers, is that they were able to take points in 2013 given any level of possession percentage. In 2014 their tendency was to earn points (more frequently) when having greater possession. This year it’s not only the opposite (so far) it’s actually the opposite by quite a large margin.

Some might say that means the tactical approach for the Timbers is far easier to predict this year than the two previous years….

A few other thoughts about the two diagrams…

When considering Passing Accuracy and Goals Scored versus Shots on Goal – for MLS (red line) that correlation is a bit lower than either the Timbers or the other leagues… for me that means the value of scoring a goal this year carries far less weight than other leagues or even MLS for 2014.

Said a different way – perhaps more goals are being scored this year as a result of individual mistakes instead of controlled, well placed, passes that create more effective shots that finish in the back of the net?

Even more apparent is the far lower difference between MLS 2015, and the others, for Shots on Goal per Shots Taken… in other words there is virtually NO correlation on how accurate a team is in having their shots taken wind up as shots on goal. 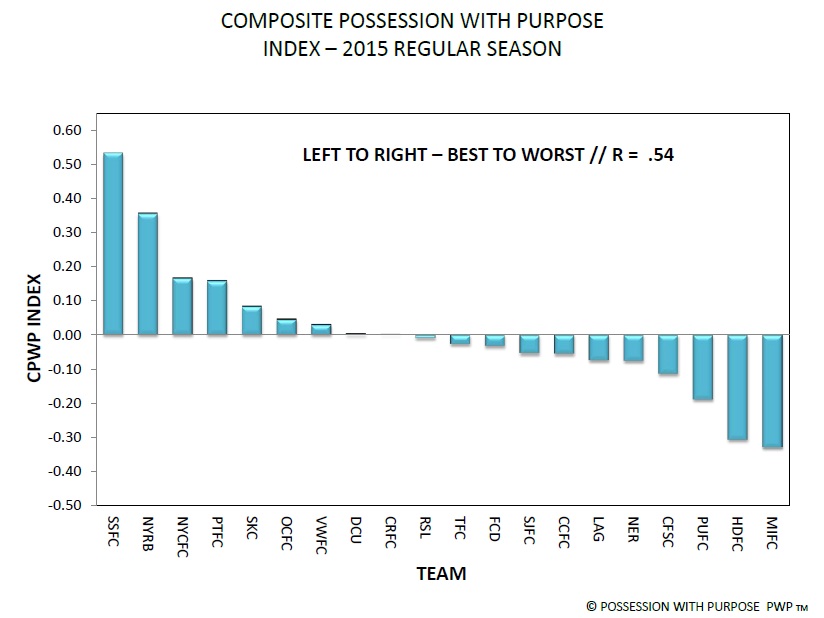 The latest Composite PWP Index for MLS through Week 6.

For now, it appears that MLS 2015 is nowhere near the general level of consistency it showed in 2013 or 2014. And the league itself, is also far different from those measured in Europe.

As a Timbers supporter I suppose that means at any given time, from any given angle, the Timbers could either get a goal or concede a goal… regardless of how good or bad their passing or penetration is…

If I were a Head Coach this bit of info might??? be interpretted a few different ways….

Either it doesn’t matter how much you plan, mistakes are going to happen and it’s anybody’s guess who makes those mistakes and when… or,

When the lads take to the pitch make sure you get the ball as far forward, as quickly as possible, so that when a mistake occurs it is more likely to occur outside your own defending final third, or

It doesn’t matter how much is spent on players – as long as we get guys who can strike the ball, in open space, (regardless of how it got there) we have a great shot at winning the game…

Enjoy the rollercoaster ride this year – I know I will!