It’s the final game of the regular season in MLS and those of us in Portland are hopeful the season continues.

In preparation for tomorrow a couple of questions come to mind given their latest form as well as their overall performance this year.

First off – and perhaps foremost on everyone’s mind is the answer to this question – will the Timbers trot out in the most recent formation given the comprehensive win in LA and the very solid performance in Salt Lake?

Second – is Caleb Porter likely to overlook Colorado as an easy victory?

Note the number of teams falling in the range of +/- .05 (6 of them) while the difference between first and worst is .60.

A couple of other thoughts while looking back at 2013: 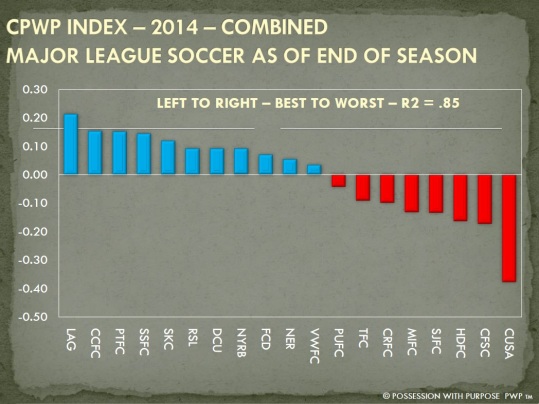 A couple of other thoughts while looking back at 2014:

Notice the number of teams falling in the range of +/- .05 (10 of them) while the difference between first and worst is .41.

This pretty much means that the overall team performance (the composite percentages in quality from start to finish) are separated by less than 5% for 10 teams – compared to just two teams in 2014 and six teams in 2013.  So for me that means more teams are more equal, in quality performance, than in previous years.

And the difference between first and worst has dropped 19% moving from .60 to .41.  This difference, for me, means the overall quality of performance between the worst to the first team is smaller, and that smaller equals greater parity….

A couple of other thoughts about 2015 relative to what we’ve seen in previous years:

Third – What was the second half speech about?

If rumor is true that Liam Ridgewell is to garner some votes as defender of the year then don’t count me in as a supporter of that.  If anything he’s been the most inconsistent defender this year.

My vote goes to Jorge Villafana – he’s a hard worker who’s got a huge responsibility and many folks simply have no idea how valuable he is in allowing Caleb Porter the flexibility to play a guy like Lucas Melano.

Darlington Nagbe and the USMNT – Word has it that Nagbe will soon be called up.  While some may disagree I don’t.

The USMNT needs a possession-based player.  Their current attacking form is pathetic and has shown no real improvement in the four/five years Klinsmann has led the team.

By bringing on Nagbe the USMNT gets a guy who can accurately pass the ball while also offering up the ability to dribble-drive.  In other words he offers something not currently present in the USMNT midfield.