Wow – what a game and what a season so far!

We’ve seen some pretty remarkable events this last year – suffering an all time low with a crushing 5-nil loss to LA Galaxy in June and then a diametrically opposed (perhaps best ever) 5-2 victory against the very same LA Galaxy not four months later…   parity anyone?

So where do we stand today?

Just one game, one tactically sound game, from advancing to the MLS Championship…

Okay, that said, it’s time to move on…

There’s a job to do and it isn’t finished; cinch the ropes a bit tighter and go for another ride.

And in understanding that, Caleb Porter has much to consider in how he sets the tone and tenor of his team this week.

I’d offer there are some very tough questions he and his staff will be asking themselves as they prepare.

While many, if not most, probably don’t think this is a worthy question I do.

If Diego Valeri doesn’t start Caleb probably runs with the same eleven that got him the three goals and the win this past weekend (relying on the old adage that if it ain’t broke don’t fix it).

On the other hand Diego Valeri is… well… one of the best players in a Timbers uniform.  So – to be realistic – it’s likely Diego Valeri starts. 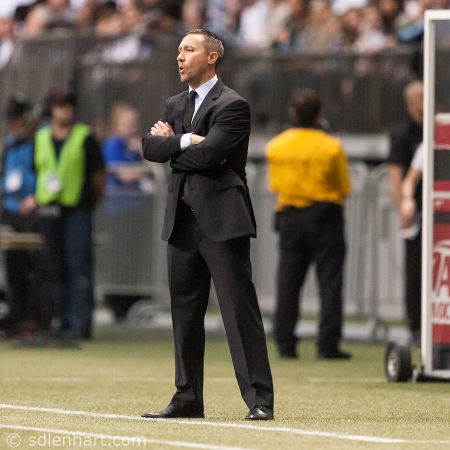 In considering that, how does that change the midfield with respect to running a single pivot versus double pivot?

This is a tricky question because the maturity of Darlington Nagbe (in playing box-to-box) kinda means the addition of Diego Valeri doesn’t mean Caleb is overtly committing to 5 attackers.  For me it really means Darlington Nagbe kinda takes on a quasi Jack Jewsbury/Will Johnson/Diego Valeri role.

In other words he leverages his skills as a great passer, with a great first touch, plus he uses his innate ability to turn and make space for himself (as well as others) while also showing improved recovery capabilities in addition to better vision from a deeper position; recall those through-balls he offered to Lucas Melano in the first 15-20 minutes.

What the change to a single pivot really means, for me, is a slightly different workload for Diego Chara. 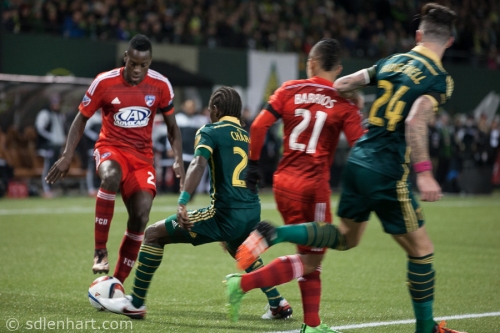 How is it different?

I’m not sure I can completely scratch the itch on this one given I don’t know the in-depth tactics but it appeared to me that both Diego Chara and Jack Jewsbury had a rotating leadership role in closing down the wings when Dallas penetrated the final third.

Who lead that initial response looked to me to depend on which player was best situated.  In other words if Jack was deeper and closer to the area being penetrated he closed down first; if Diego was closest he responded first.

Whoever was second took the role of managing the space around the corners or middle of the 18 yard box as well as providing direct support if the other player got beaten.

With Jewsbury off the pitch, and Darlington Nagbe usually working a little bit further up the pitch, it means Diego Chara will probably have the lead on closing down no matter which side of the pitch is penetrated.

This, in turn, probably means Diego will have more of a sustain and contain role as opposed to trying to regain possession at the earliest opportunity.

That sustain and contain role then allows Wallace/Melano/Asprilla/Nagbe to then take on the secondary response role that Jewsbury would normally be asked to do.

So in going back to try and answer the question on running a single pivot versus double pivot it gets even more complicated as the wingers are likely to have a different role as well.

Which leads to this question. 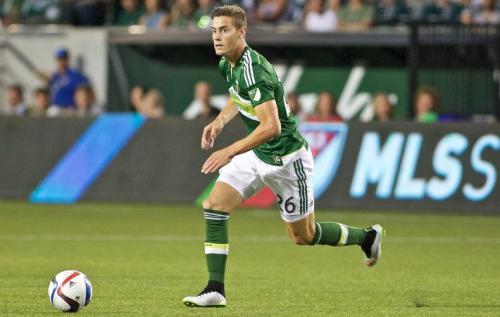 Does Lucas Melano start in lieu of Rodney Wallace?

Before answering the question I think it’s worthy to note the value Melano added in attacking and defending without knowing his prescribed role last game.

All told he made some superb penetrating runs and provided good support in defending behind the ball – not a bad game even though he had another great opportunity to score.

That said we still need to try and answer the question…

Is it as simple as that?   Probably not, but with Asprilla/Nagbe/Wallace/Melano all having increased defensive responsibilities with the single pivot, and Diego comes in to add a player who is more attack minded than defensive minded, it really kinda means Wallace is more likely to start given he shows a bit more grist in defending.

Said another way – Caleb needs to sustain a balance in attacking and defending; that balance is more attack minded with both Melano and Valeri on the pitch; so…..  Rodney should get the call as it’s likely Diego Valeri starts.

Is Liam Ridgewell injured and can he play?

I don’t have the answer to that but here’s what I would offer.

If Ridgewell is slightly injured, and there is a chance he might have to be subbed given a recurrence of that injury, I’d offer serious consideration is given that he doesn’t start.

That may not be the popular move but if you, as a Head Coach, can save a substitution for a game state not intended, then going with the known is usually better than going with the unknown.

In circling back to FC Dallas – they remain a dangerous team.

I wouldn’t be surprised to see Oscar Pareja flip which sides Castillo and Barrios attack from to show a different look in attack.

Dallas love to penetrate the wings and create opportunities for cut-back passes into open space atop or around the corners of the 18 yard box or penalty spot.

And if they weren’t successful in doing that with Barrios on the left side last game it seems reasonable they’ll try him on the right side this game.

Bottom line here, for the Timbers, it’s all about managing the space and time when FC Dallas have the ball – figure defense first with a tangible attack that creates solid opportunities to score goals.

Have a great thanksgiving weekend and get ready to ride the bull again!

If interested here’s some additional thoughts on the Timbers match against Dallas as part of the Yellowcarded Podcast.

Finally, here’s more thoughts on this game from myself, Kip Kesgard, and Will Conwell and our Rose City Soccer Show.