So if you think their early start was a fluke – think again.

And to clarify – my power rankings are purely objective – no fancy opinions – no feelings – no indirect or direct influence by one person over another – it’s clinical, objective, published in Europe, and presented at the 2014 World Conference on Science and Soccer.

Bottom line here – there is no subjectivity and how a team finished last year has absolutely no bearing on where that team started and ranks this year.

Some thoughts about the teams after week ten:

Over the remainder of the year I’m going to offer up four teams who fit these categories the best:

The diagram above shows Attacking PWP only – this is strictly the statistical roll up of each teams attacking team performance.  Note the four blue bars – these are the top three teams in each conference.  Now my observations relative to what the Index shows:

Here’s the Defending PWP Index – same approach applies here – this is a statistical roll up of each teams defending team performance ((i.e. how well the opponents’ combined attacking PWP data goes against their defenders); again the top three teams in each conference are shown with blue bars: 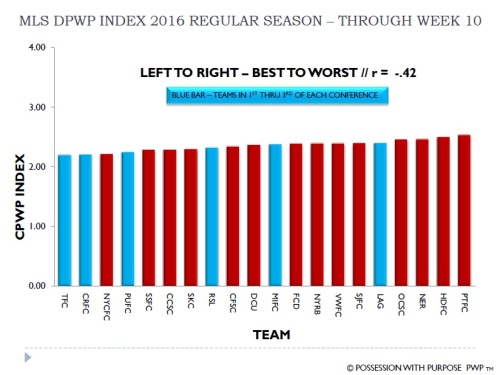