Perhaps the two most prolific head coaches in Major League Soccer Soccer meet again this weekend for what many are hoping will be a precursor to the Western Conference playoff finals this year.

Some will say the gloss and glamour of this match will be lost with Mauro Diaz and Diego Valeri, arguably the two most talented attacking midfielders in MLS, missing the game due to injury.

I disagree – if anything – with both maestro’s missing I think we’re in store for a great game.

Both head coaches need to adjust, or do they?

Pareja more likely has the advantage given Diaz has been out for some time and adjustments will be few, if any.

We already know his method of success is rock-solid – NO team in MLS has executed the counter-attack better.

And with (probably?) the strongest center-back pairing in the league it’s likely the space created atop the 18 yard box, or across the face of the 6 yard box, will be at a minimum.

But Porter has shown in the past he’s got a strong record for in-season adjustments.

The most blindingly obvious was a tactical shift two years ago when Porter finally bent to the will of a few local pundits, and in–house staff, when he shifted Darlington Nagbe inside left.

We saw, even last week, another shift, of sorts, by Porter.

This too, was influenced by player availability.

And while some may be thinking it was the addition of Darren Mattocks, and his game winning goal that led to the victory I’d offer it was a bit more than that…

Dairon Asprilla for one, Vytas for two, the return of the oft-cynical leader/captain Liam Ridgewell three, and the sleeper in all this (me thinks) is how well Jeff Attinella showed in replacing the injured Jake Gleeson. 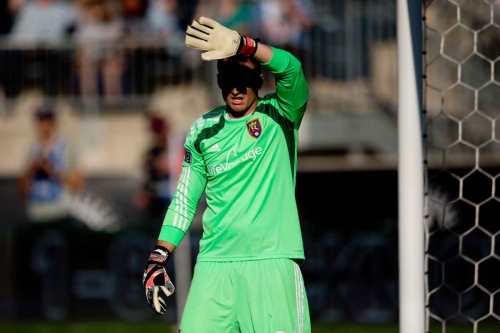 So on to the kickoff…

Portland: i’d offer Dairon Asprilla starts on the left, with Seb Blanco right, Darlington Nagbe across the middle and Fanendo Adi up top… the back six should remain as last week…

FC Dallas: I’m figuring Urruti up top, with Lamah, Morales, and Akindele in support…  their back six should also remain as last week.

Dallas, at home, will probably play higher up the pitch – with a high press across the midfield – I’d imagine Portland plays slightly deeper hoping to create additional midfield space for retaining possession.

While Porter will spread things wide, on occasion, my instincts are suggesting he’ll look to play down the middle as much as possible.

With Pareja missing Diaz the central play-maker role falls to Morales, who’s talented – no doubt – but he doesn’t have the nous of Diaz or Valeri…

2. It’s early days – I figure Portland comes in and plays to their strengths and challenges Dallas to stop them in as much as Dallas does the same…  regardless of the outcome in this one both teams will learn, adjust and look to their next match as the real chess game…