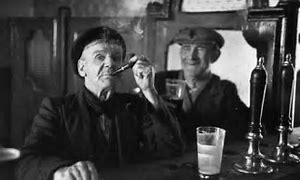 There is no doubt most pundits offer this as being the greatest World Cup ever, espousing upsets throughout the competition.

I think the majority of those upsets are more about FIFA have a dodgy ceding process than how teams are really performing on the pitch.

In tracking the odds on favorite to take the World Cup it’s:

My current Possession with Purpose Total Soccer Index shows the favorites as being: 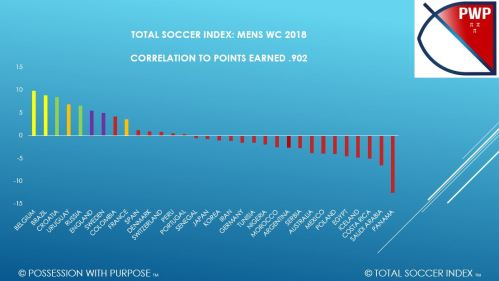 As mentioned earlier – many are saying there have been a large number of upsets in the World Cup this year.

Since my TSI was 100% accurate in predicting the teams to advance to the quarterfinals earlier this week I’m inclined to disagree – things went as the team performance statistics indicate. 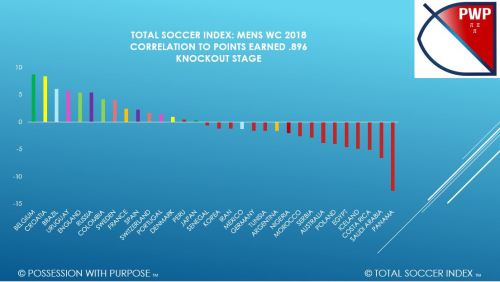 Color coded bars show knockout stage match-ups; in every case the team shown with the higher TSI number of the Group Stages advanced.

With so many late goals scored and shootouts deciding the winners this is a tough World Cup to figure out – what some have seen as being upsets really weren’t when checking results against the TSI.

For example, this year Germany have been near mid-table in the TSI whereas in 2014 Germany led the Index from Group Stages onward.

This year Belgium has led the Index from Group Stages onward.

More to follow but at this stage in the World Cup my odds on favorite to win is Belgium; with Brazil a very close second and Croatia third.

Note: my TSI does not take into account individual players like Cavani – this is strictly a ‘team performance index’ so if you think Cavani and/or Suarez or Casomire missing will impact a team result bet as such.