Two weeks in and Manchester City pretty much throws the gauntlet down against Liverpool and walks away with a dominating win.

Three other teams have also begun the season with six points (Spurs, Swansea, and Chelsea) but do those four teams show the most consistency with purpose in possession, penetration and creation of shots taken that result in goals scored?

And, do those same four teams show the most consistency in preventing their opponents from doing the same thing to them?

What about the early season dogs (QPR, Burnley, Crystal Palace, and Newcastle) – where do they fit?

I’ll try to answer those questions without too much detail given the season is just two weeks old.

So to begin; here’s the Composite PWP (CPWP) Strategic Index after Week 2: 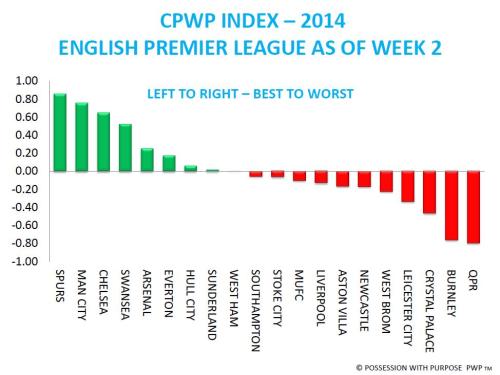 I leave that individual analyses for others who are far better at digging into the weeds than I – for the EPL I’d imagine many folks gravitate to @statsbomb or other @SBNation sites – I respect their individual analyses as I hope they respect my team analyses.

Whether the consistency of value shows itself in assessing team performance in the EPL like it has in Major League Soccer I have no idea – we will follow that journey, in public, together…

Next up Defending PWP (DPWP):

Far too early to look for trends but these first few weeks will provide a baseline for future trends.

The margin of winning and losing in MLS is far to muddied when looking at Possession – so as the EPL season continues I will also make it a point to study what ‘soundbite’ has more relevance; Passing Accuracy or Possession.

Other links that may be of interest to you include:

My presentation at the World Conference on Science and Soccer

Thanks in advance for your patience.

This site uses Akismet to reduce spam. Learn how your comment data is processed.