No detailed statistics today – just a narrative to pass on a few tidbits as I prepare my End of Season analysis for Europe.

The European Season is ending.

I think these two video presentations by Hector Ruiz and Paul Power, from Prozone, are worth listening to.

Modern day soccer statistics, for the most part, don’t measure the appropriate level of influence teammates, opposing players, and Head Coaching tactics – as such when I say I’m not a Moneyball guy when it comes to soccer it really means I don’t buy all that crap about tackles, clearances, goals scored, etc…

I value players relative to team outputs and I strongly feel and think the more media and supporters who understand this about soccer the less frustration they will (have) in blaming or praising one individual player over another player.

So what is missing from the generic soccer statistical community to account for the void in Unsuccessful Passes?  Is it another statistic like Tackles Won, Duals Won, Blocked Shots, or Recoveries?

I don’t think so – none of them generated a marked increase in the overall correlation of those three activities already identified.  I think (it) is the physical and spatial pressure applied by the defenders as they work man to man and zone defending efforts.

All told – two well crafted presentations that begin to open up and really reinforce some of my soap-box issues with soccer statistics since starting my research three years ago.

To be redundant – soccer is not just about scoring goals – there is more to the game than goals scored; these two presentations continue to support my view that the world of soccer statistics needs to continuously get better…

My back-yard / stubby pencil approach to team performance analysis is soon to be published through Rand.

Last but not least, the Women’s World Cup is beginning.

I’ll get to that but first I need to set some conditions.

If you’ve read my article on Expected Wins 2  (XpW) it seems reasonable that a teams’ Passing Accuracy in the Final Third has great value in working towards generating quality shots taken that are more likely to be on goal and (therefore) more likely to go in.

So what activities does the defense take to mitigate successful passes (i.e. generate Unsuccessful Passes)?

Additional twists in my efforts will be to fold my Opponent team attacking statistics in with my team Defense Activities to see what correlations might be present.

My data comes from the first 71 games in MLS this year (142 events) and my source is the MLS Chalkboard.

Bottom line up front (BLUF) – however this data plays out it needs to make sense so here’s my operating conditions on Team Defensive Activities in the Defending Final Third and which ones I will focus on that can be associated with an Unsuccessful Pass in the Final Third:

To summarize – Blocked Crosses, Interceptions and Clearances will be counted as defensive activities that should impact the volume of Unsuccessful Passes.

So what are the correlations between those combined Defensive Activities versus Unsuccessful Passes after 142 events?

It seems pretty clear that Teams who win have more Defensive Activities, that in turn increase their Opponents’ Unsuccessful Passes given the higher positive correlation than losing teams – in other words a team that wins generally executes more clearances, interceptions and blocked crosses to decrease the number of Successful Passes their Opponents make.

It also seems pretty clear that all those Defensive Activities don’t account for the total of Unsuccessful Passes generated by the Opponent.  If they did then the correlation would be higher than .7833; it’d be near .9898 or so.

So what is missing from the generic soccer statistical community to account for the void in Unsuccessful Passes?

Is it another statistic like Tackles Won, Duals Won, Blocked Shots or Recoveries?

I don’t think so – none of them generated a marked increase in the overall correlation of those three Activities already identified.

I think it is the physical and spatial pressure applied by the defenders as they work man to man and zone defending efforts.

To date I’m not aware of any statistics that log ‘pressure applied’ to the attacking team.  A good way to count that would be tracking how many seconds the defending team gives an opponent when they recieve the ball and take action.

My expectation is that the less time, given the opponent, the more likely they will hurry a pass that simply goes awry without any other statistic event to account for that other than – bad pass due to being hurried.

So in other words; like the NFL tracks hurried passes, I think that the Soccer statistical community should also track “hurried passes”…

I’m not sure that completely closes the gap between those three Defensive Activities and Unsuccessful Passes but it does seem to be a relevant statistic that can attempt to quantify panic in an attacker while also quantifying good physical and spatial pressure by a defender.  Two relevant items of interest to a coach in weighing the balance on who plays and who doesn’t and who they might like to add to their team or perhaps put on loan/trade elsewhere.

In addition – an increase in hurried passes can become a training topic that drives a Head Coach to develop tailor made passing or turning drills to minimize Hurried Passes (make space) while also providing a Head Coach statistical information to generate tailor made defensive drills that look to increase Passes Hurried.  I’d expect the level of the training drills to vary given the level of skill/professional development as well.

So how might someone define a “Hurried Pass”?  I’m not sure; there are plenty of smarter people out there in the soccer community than me – if I had to offer up a few suggestions it might be a pass that goes out of bounds given defensive pressure, or maybe a through-ball that goes amiss given pressure from a defender – in other words the timing of the delivery looked bad and given defensive pressure it was off-target.

A more to follow is this recent article entitled New Statistics Open Pass and Open Shot.

If you’ve been following me the last 2-3 years, through Columbian Newspaper, out of southern Washington, you’ll know that I’ve been researching data with the intent of creating some Indices to analyze “team performance” in Major League Soccer.

The initial version of my Possession with Purpose approach was published on 10 February, 2013 on the Columbian Newspaper Portland Timbers Blog Site (here).

This revised version was published on the 15th of January, 2014.  I retain COPYRIGHT on all materials published in association with Possession with Purpose (PWP) TM

My intent has been to develop a simplified (Strategic) set of team performance indicators that may help others better understand soccer and how the outcome of a game may be better understood based on the primary inputs to the game.

Data for presentation originally comes from documenting and analyzing all 646 MLS Regular Season games in 2013; my research in beginning to develop Possession with Purpose, as it is known today, began mid-season 2012; the pre-cursor articles on that effort can be found on my Columbian Newspaper blog site.

All future research will be published here…  As things have progressed my research and efforts in Possession with Purpose led to an invitation to present my findings at the World Conference on Science and Soccer 2014; that presentation can be found through this link.

The source data originates with OPTA and is displayed on the MLS Chalkboard and the MLS Statistics Sheet found through www.mlssoccer.com.

With that here’s my introduction on Possession with Purpose…

To first understand the context, I offer that this is one of the End States of my effort:

Create a simplified approach and documented method for measuring team performance where the output is an Index that (while excluding points) comes close to matching results in the MLS League Table.

Beginning with that End State in mind here is the End State product: 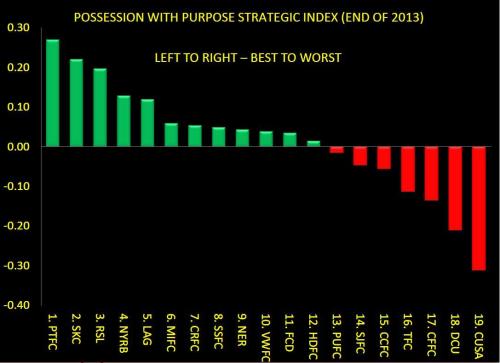 Observations from the Diagram…

Note that 9 of the top 10 teams in this Index made the MLS Playoffs last year with the Houston Dynamo finishing 12th in the Index.

For comparison, in benchmarking whoscored.com their Index only had 8 of their top 10 teams make the Playoffs, while http://www.squawka .com matched my 90% success rating, but the team they missed in the top 10 (New England) finished 16th in the Index.

From a strategic standpoint, the End State objective has been met; create a simplified approach and documented method for measuring team performance where the output is an Index that (while excluding points) comes close to matching results in the MLS League Table.

Here are the six steps in the PWP Strategic Attacking Process:

Here are the six steps in the PWP Strategic Defending Process:

Every step is this process has an average success rate (percentage) based upon data gathered from all 646 MLS Regular Season games.

In case you missed it I call these Processes and the Indices “Strategic” to separate their value/meaning relative to other things that can influence the outcome of a game.

For me I have two other ways to classify information that can influence the outcomes in those steps. I have Operational conditions and Tactical metrics; provided below are some examples of each:

The diagram below shows the PWP Strategic Attacking Process with the average percentage of success rate in MLS for 2013. A more detailed explanation of each step is provided below the diagram. 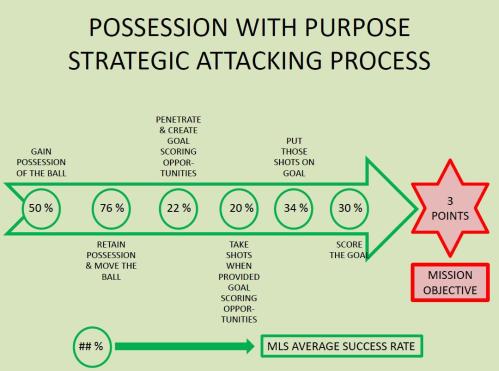 Step 1: Gain possession of the ball: The intent behind this basic step should be clear; you can’t win the game if you don’t possess the ball to some extent. A second consideration about this step is that the more you possess the ball the less your opponent possesses the ball.

Step 2: Retain possession and move the ball: It shouldn’t be a secret to many that in most cases the team possessing the ball will need to move the ball in order to penetrate the opponents Defending Third and score a goal.

Step 3: Penetrate and create goal scoring opportunities: Most know that a pitch is divided into three parts; the Defending Third, Middle Third, and Attacking Third. For the purposes of this effort, Penetration is associated with entering the opponent’s Defending Third with the intent to score.

Step 5: Put those Shots Taken on Goal:For the most part this is an individual statistic that is added up to create a team performance indicator.

Step 6: Score the Goal: One critical objective of the game. 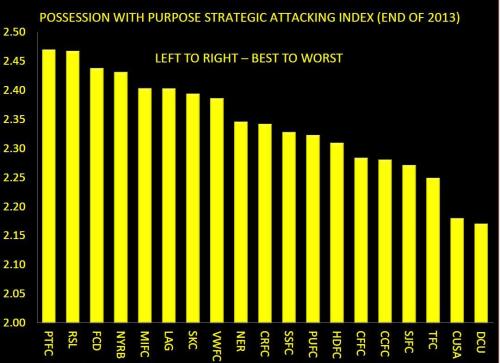