My thanks to everyone who has supported my web site the last four years!

It’s been a learning experience for me and, I hope, for you too.

As the new year starts I’ve got at least five new articles planned; here’s a quick synopsis on what to expect:

Said differently; are private statistics companies, like Prozone Sports, OPTA, and InStat (along with player agents) manipulating the player market value system by ignoring what might be the most logical, intuitive, individual soccer statistics ever?

For now, in case you missed one or two, here’s my rundown on the top five articles in each of the last four years.

I wish you all the best for the new year. 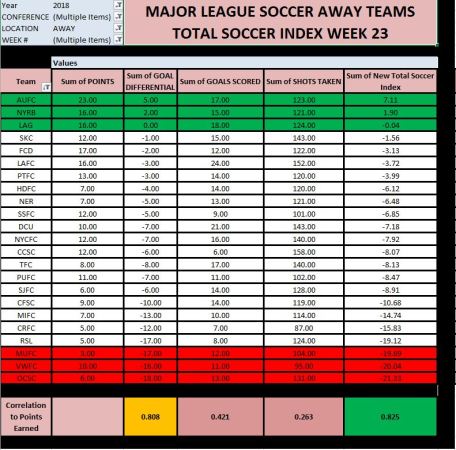 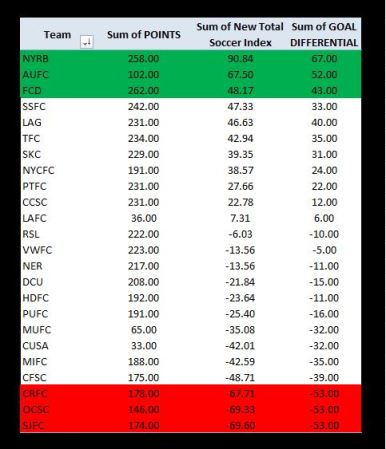 Major League Soccer nears the All Star break and most teams have reached the mid-point in games played.

From top to bottom here’s the latest on MLS team performance in possession, passing accuracy, penetration, creation, precision, and finishing.

Being the best in just one of those categories does not mean you are the best in total team performance.

I’m sure some think my promoting the accuracy and value of this Index is arrogance – it’s not arrogance when you’re right – it’s confidence.

I’ve narrowed my scope of who might fit best by limiting the selection pool to those who currently lead a team in Major League Soccer.  This obviously includes a broad band of candidates – you need to start somewhere.

I’ve taken that statement and converted it into measuring four categories of possession:

My intent is to try and quantify/qualify three basic styles of play:

My relationships between the four measured categories of possession and three styles of play are:

Its’ not perfect, but then again, soccer isn’t perfect either.

Note:  Prozone has identified ~ 7 styles of play – I try to keep things simple.

I’ve made a list of five Head Coaches for consideration:

Why didn’t I include Jason Kreis?

He’s been relieved of coaching duties twice and failed to make the playoffs with Orlando City.  Something, somewhere isn’t working…  nothing personal.

Here’s their initial PPG by each category from 2014 to 2017 (excluding the final two games): 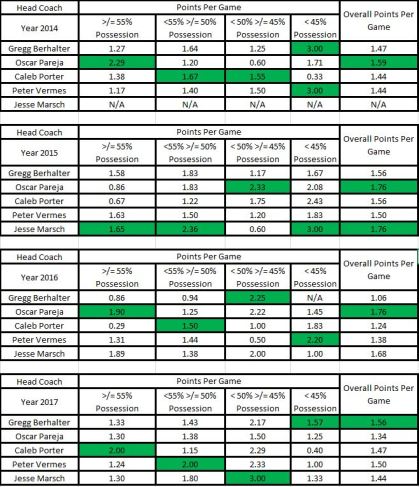 The cells highlighted in green show which Head Coach had the highest PPG (per year) in the four categories listed.

It’s pretty clear those five coaches having varying strengths in earning points relative to the four categories of possession.

Here’s their average PPG over the last three years in an attempt to quantify/qualify their “consistency of purpose” – a phrase usually associated with Dr. Deming:

So how do their teams perform against conference opponents?

An attempt to measure how well each coach’s team performs against a “known quantity”; similar to the US Men’s National team playing “known” CONCACAF opponents… 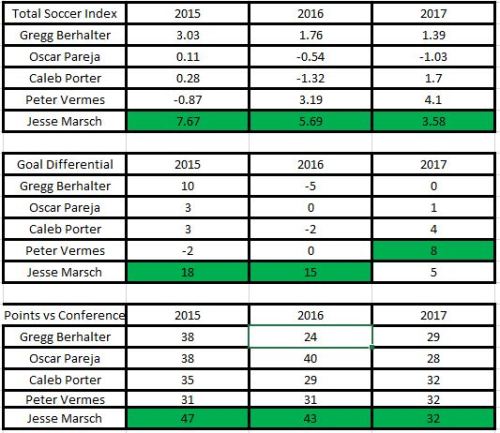 Note the 2017 data excludes the last two games of this season.

I’m not on the bandwagon of blasting US Soccer, USSF, Sunil Gulati, the Coaching Staff, or the Players anymore – that’s old news for me; especially since the rest of our soccer media has finally caught up to what I was thinking after the US Men’s team performance in World Cup 2014.

Here’s my summary of issues back then that STILL REMAIN today:

So am I personally surprised by the result?

No… and I don’t know why other guys who’ve played at that level are!

Anyway, since I’ve already lambasted US Soccer and Sunil Gulati, many times over three years, my target for today is mainstream soccer media.

Yes…  in the last two days mainstream media has blitzed Sunil Gulati and US Soccer/USSF given the horrendous result against T&T.  In a way, rightly so, but in a way…. very disappointing.

It’s disappointing because there’s nothing here you shouldn’t already know if mainstream news/TV media had done their job of informing/educating our country in HOW soccer is played and what statistics should be used to quantify or qualify results.

Hmmm…  you sure about this Chris?

Throughout the course of US World Cup qualifications mainstream media has quantified and qualified good or bad performances of players and coaching decisions based on the use of “event-based” statistics.

Here’s some you may be familiar with:

Expected Goals, Expected Passes; numbers of Clearances, Tackles, Recoveries, Crosses, Missed Chances, Key Passes, Goals Scored, Shots Taken, Save Percentage, Blocked Shots; or Composite indices like the Audi Player Index or Castrol Index plus countless other ones too many or unworthy to name.

This information is well-intentioned but if you KNOW and understand HOW soccer is played NONE of these statistics have value UNLESS the author or TV pundit qualifies the data based upon how the opponent influenced those outcomes.

So… in EVERY instance (EVERY article and EVERY TV broadcast) mainstream media uses these event-based soccer statistics they facilitate ignorance of the mainstream soccer audience.

In other words, in modern terminology all that info they use is “fake news”…

But wait, there’s more… what is an article (in today’s environment) without including at least one tweet.

Last week the most popular @MLSSoccer.com writer, Matthew Doyle, tweeted about Paul Arriola, a good player who brings “energy” but world-class…. no.  My response, however harsh, is included.

Matthew Doyle, from MLS Soccer, offers this quote in a recent article.

“Second is that, at the end of the video from last night, you can see me pleading for you (yes you, the one reading this) to get involved, specifically as a coach or a referee.”

I am involved.  I am a coach, I have coaching qualifications both here and from the United Kingdom.

I’m also a soccer analyst who’s been published in London and my statistical analysis has been presented at both the 2014 and 2017 World Conference on Science and Soccer.

So I have standing in what I offer as criticism to you and mainstream soccer media. 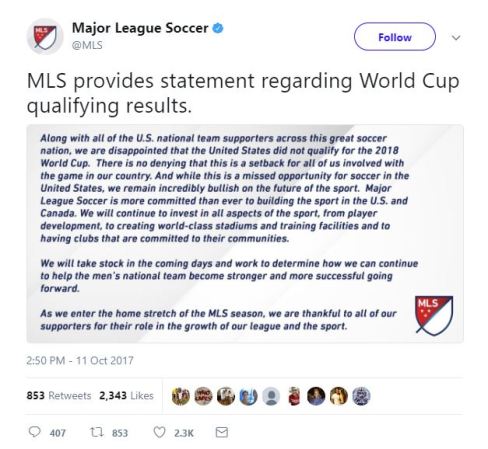 I won’t prejudge MLS but I will offer some suggestions for MLSSoccer.com given my standing:

Bottom line at the bottom:

A reminder of where the US Men’s National Team finished in the Total Soccer Index for World Cup 2014 and why I’m not surprised they didn’t qualify for WC 2018.

By the way; just because I didn’t write an article about sacking Sunil Gulati, or other things like “pay to play” doesn’t mean I disagree with great articles like this one by Neil Blackmon.

Lots going on to share with you as Major League Soccer gets set for this weekend.  In particular order:

As a reminder – I called out Expected Goals and Expected Passes this week.  Positive response from my European readers has been tremendous; so far my readers in the United States have remained quiet.

In case you missed it the explanation about what the Total Soccer Index is, is here.

This is how the league looks in a single table format; of course it’s pear-shaped from the start because the league doesn’t play a balanced schedule for everyone.

The Eastern Conference has been the more predictable conference all year even though MLS has an unbalanced schedule.

I’m not sure anything is settled in the wild-wild west.

Who wins the MLS League Championship?  I have no idea.

Jay Heaps gets the heave-ho by New England, why?

It appears that quality has been roughly the same, year in and year out since 2014.

Given the trends offered through PWP analysis it appears parity is on the decline in MLS.

When the season ends poor management will be rewarded with more money instead of being relegated; entitlement is alive and strong in Major League Soccer.

Predictions for this weekend: 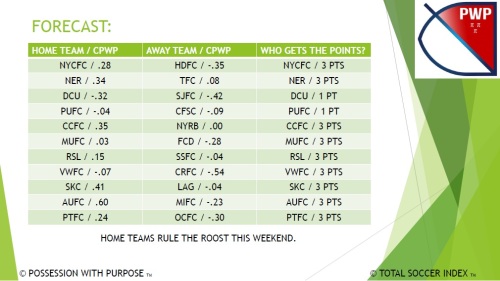 As with most weeks, the home team is more likely to earn points.

By the way, if using the TSI to predict who would have won the U.S. Open Cup the numbers show Sporting KC with an average TSI of .41 (at home) while the New York Red Bulls were .00 (away from home).

The final result was 2-1 Sporting KC.  In hind sight the TSI predictor was accurate in predicting the U.S. Open Cup winner.

Is this a likely pre-cursor to the MLS Championship Game?

I’m not sure, but given the wild west, and more predictable east, it isn’t beyond reason to think so.  In preparing my information for your consideration here’s a link to my Total Soccer Index:

Toronto at home compared with Portland on the road.

The part of Possession with Purpose that stands out first is ‘penetration’.

It is likely Toronto will penetrate more often and offer up more shots than Portland – meaning a reasonable game plan for Portland will be to cede some space up top (maybe after the first 15 minutes) and then look to clog the middle and defensive third of the pitch.. relying solely on the counter-attack to get a goal, or two… 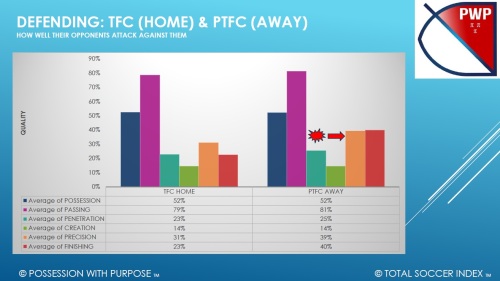 Like the attacking side of the equation; the part of Possession with Purpose that stands out first on how opponents attack against these two teams is penetration.

It would appear penetration is the key for both teams… therefore, trying to regain possession of the ball in the attacking and middle third will be crucial in order to disable a quick counter-attack when the ball is lost.

As much as it pains me to offer this – Bradley is known for coughing up the ball in the middle third of the pitch – I’d expect both David Guzman or Diego Chara to pressure Bradley whenever he has the ball.

Bottom line:  If Portland scores (at all) they will REALLY need to protect that lead and that includes protecting the wings from overload by Toronto. 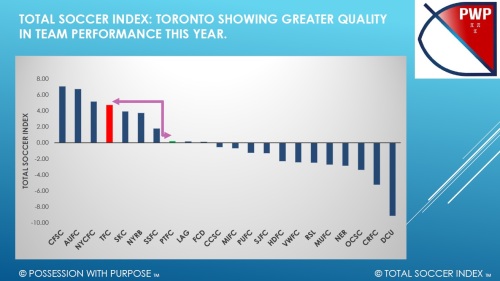 If you’re a betting person – it’s likely Toronto win by at least one goal – if not two… but as we’ve seen this year “parity” rules in this league.

And even though the eastern conference seems to show greater strength in possession with purpose competitive conditions of the wild west may better suit Portland in a game like this.

Questions:  It’s the fantastic four of both teams that will make the difference in the run of play. 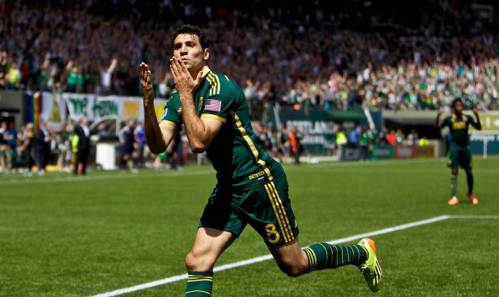 The magic of one player, with one touch, that leads to one strike, and one brilliant goal awaits… as Diego Valeri, like set pieces, wins games too…

Re-tweets are not rude… 🙂