No European team can match the league domination that Bayern Munich has shown this year in the Bundesliga.  However, in spite of Die Bayern’s efforts to run away with the title, the German premier division is still awash with fascinating stories.

The race for the remaining Champions League spot could not be closer – five teams are separated by a mere two points.   And no, that excludes Dortmund, who are floundering in the relegation zone.

Here’s where they compare with each other in my Composite Possession with Purpose Index:

All five teams in the top half (positive side) of the CPWP Index.  Meaning all five of those teams are, on a regular basis, outperforming their opponent’s in PWP attacking and defending.

From this it would seem pretty obvious that Bayern Munich also stood out way above all others in the CPWP Index.

In addition, it’s good to see the Index also shows a marked difference, in overall team performance, between Wolfsburg and the other five teams battling for the final UEFA Champions League spot.

Of all the leagues I evaluate, using my Possession with Purpose Family of Indices, this League usually shows the best overall correlation.

Meaning, for some, it may be far more predictable – in other words perhaps the Bundesliga is a great league to bet on game results?

If you do that sort of thing here’s what the CPWP Predictability Index looks like:

A reminder – the CPWP Predictability Index was developed after I had some great discussions with folks at the World Conference on Science and Soccer 2014.

Myself, Ben Knapper (Arsenal FC Head of Stats) and others at PROZONE sports all agreed that the Index ‘could?’ have value as a predictability model if Goals Scored/Against data was removed.

The teams with Green Bars are the five teams battling for the third and final UEFA Champions League spot – the Purple Bar, Borussia Dortmund, is highlighted simply because they ‘should’ be winning – given their talent – but they aren’t!

But… could this be a model to actually reinforce Borussia Dortmund still remain a team who can make UEFA Champions League next year even though they are 13 points behind Bayer Leverkusen?  I wonder what the odds are on that?

If you missed my presentation at the WCSS of 2014 here’s a link – in the seven months of this blog it has been my most viewed/read article.

Here again the top two teams are tops in the Index.

For those thinking the best in attack is what drives success it appears FC Schalke and then Bayer Leverkusen are best situated to push forward – while Augsburg slides way back towards Borussia Dortmund.

In taking a look at FC Schalke versus Bayer Leverkusen what separates them in this Index seems pretty interesting.

Looked at from a Leverkusen viewpoint – Bayer actually possesses the ball more – but is less accurate in that possession.  In addition they also look to penetrate far more frequently than Schalke.

When digging into the shots area – Schalke show more patience in taking fewer shots by volume and percentage but both teams end up with roughly the same volume of Shots on Goal and Goals Scored per Shots on Goal (36% for Leverkusen and 34% for Schalke).

Before moving on to Defending PWP I think there is value in taking a look at Augsburg.  Earlier this week I did an article on Major League Soccer called “Getting More from Less“.

The intent was to see who did better last year, in MLS, in getting better results with lower team performance.  My gut-check example to quantifying the results in MLS was West Ham and their Direct Attacking nature.

What I determined was a team who averaged fewer passes than the League Average (both within and outside the Opponent’s Defending Final Third) with less than 50% possession could be reasonably called a Direct Attacking Team.

In looking at Augsburg here’s their attacking data as it fits that mold.

Overall dead on average in Possession at 50%.

Passing Accuracy within the Opponent’s Defending Final Third (56%) – less than the League Average of 57%.

Total Passes within the Opponent’s Defending Final Third for Augsburg was 114 – the League Average 126.

So on the surface it would appear that Augsburg shows the tendency to play more Direct Attacking, as opposed to a Counter-Attacking ‘tactic’, within a Possession-based game.

For Augsburg – they’ve had eight games that have followed the mode of Direct Attacking – they’ve won five of those games.  Pretty solid in getting more from less – but can they sustain that?

The West Ham review showed they have won 7 games out of 11 games where their team averages fell into the Direct Attacking mode.

It would seem Augsburg are almost as successful (percentage wise) in matching West Ham when it comes to winning games where their performance falls below League Average… (63.63% for West Ham versus 62.5% for Augsburg). 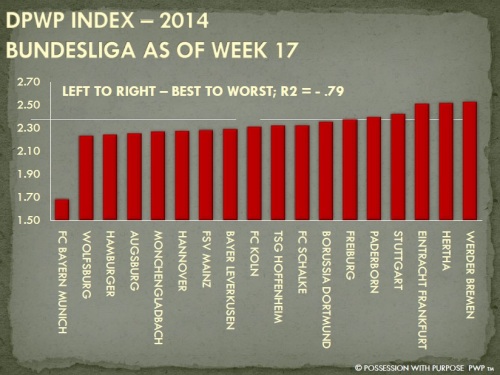 Augsburg, like West Ham, are pretty high up in the Defending PWP Index (Hammers are 6th best in the EPL DPWP Index versus Augsburg who are 4th best here).

So the value of a higher team performance in defending helps sustain success with the lower volumes offered up in attack.

Meaning the will of Augsburg rides more with a collaborative approach, in overall team play, than strictly an attack dominated performance.

Monchengladbach is next highest here, while TSG Hoffenheim doesn’t seem to shine in either Index.

So what separates Monchengladbach from TSG?

Opponents for both teams average total passes, both within and outside the Defending Final Third, greater than the League Average – so by and large most opponents are playing possession based attacking against these two sides.

Where it gets interesting is the volume of successful passes by their opponents after they’ve entered their Defending Final Third.

I’m not sure which – those with video or access to X,Y coordinates may know that better?

Anyhow – clearly the data points towards one team having a different defensive scheme that may also include Mochengladbach simply having a much better Goal Keeper.

Half the season remains and while Bayern is basically blowing the Bundesliga away there are others who are still making this league worthy to watch.

Will it be the West Ham of the Bundesliga (Augsburg)?  Can Borussia Dortmund pull it back?  How about the other challengers who appear more steady, like FC Schalke, Bayer Leverkusen, or Monchengladbach?

And does TSG Hoffenhein really have a chance as well?  For some I bet UEFA Champions League is the goal for next year – but others might also be shooting for Europa too.

And this doesn’t even broach the topic about who gets relegated – Might that Borussia Dortmund ends up in that race instead?  Wow…….

Jürgen Klopp would get clobbered if that happens!

But before digging into the Possession with Purpose Family of Indices some general news for consideration.

As the PWP Indices have shown such a strong correlation/relationship to the league tables without using points earned, in ALL competitions measured, I want to try a create a quantifiable way to measure “luck”.   More to follow… 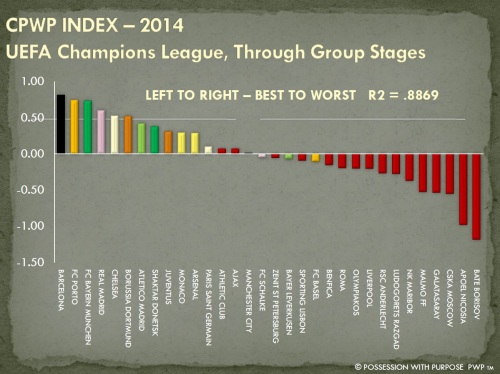 A few explanations to better understand the diagram – I have paired up the teams (color coordinated them) to show the match-ups for the knock-out stages.

This way others can get an idea of how their team CPWP, APWP, and DPWP Indices compare.

I won’t go so far as to say that the team expected to win has their color first but I would offer it may give you an inkling of who might be favored to advance.

Finally, the red bars represent those teams that did not move on to the knock-out stages.

So here is how the teams compare in the Strategic Attacking Index: 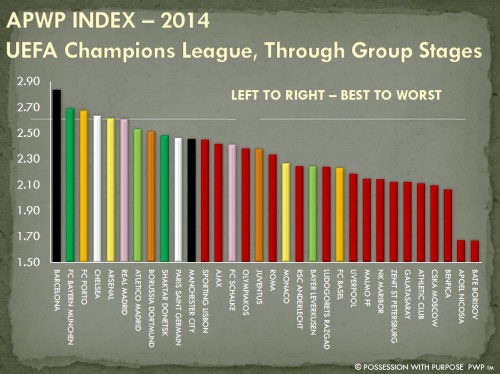 I’m a firm believer that Defense wins Championships – but I’m also not willing to ignore how effective team attacking performance is in relationship to team defending.

With Barcelona, Bayern, Porto, Chelsea, Arsenal, and Real Madrid being slightly head-and-shoulders above the rest, in attack, it’s likely those teams will put on a great performance.

All told I’d offer those teams will work towards a possession based attack – especially seeing their opponents.  I’d also offer up that Juventus is likely to work towards that style as well.

Teams like Schalke, Dortmund, Donetsk, Leverkusen, Man City, and PSG can show willingness to possess the ball but I think they will cede somewhat more this stage than in the Group Stages.

Teams like Atletico Madrid, FC Basel, and Monaco are )highly) likely to continue to cede possession and play for a swift counter-attacking (almost direct attacking) style of soccer.

FC Porto have been best, with Bayern, Monaco, Dortmund, Real Madrid, and Barcelona not far behind…

If there is an anticipated blow-out I’d offer Real Madrid is the team most likely to win big – with Porto next up against Basel and Atletico Madrid handling Bayer pretty easily.

As for the others – way too close to call in my opinion – and I’d imagine a huge audience on telly for the Man City/Barcelona match-up – and you can be sure I’ll be watching The Arsenal take on Monaco!

If you want a taste on my approach in measuring luck – consider this – Athletic Club had just seven points earned yet they were 7th best in team defending performance and 13th best in the overall Composite Index performance…  if any team was unlucky, in the Group Stages, it was Athletic Club.